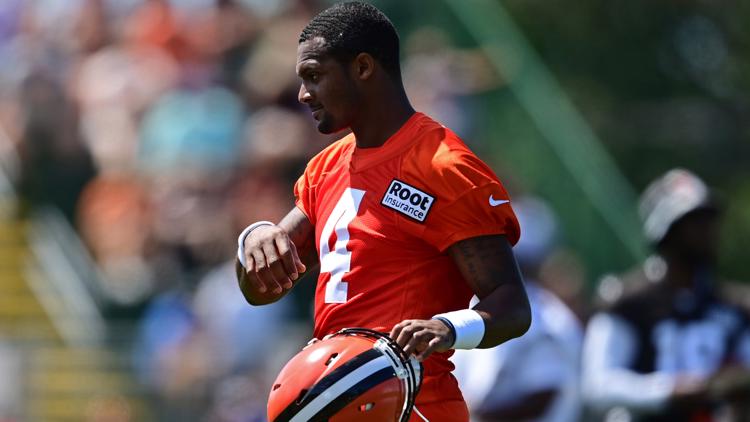 Watson may return on October 23 when the Cleveland Browns take on the Baltimore Ravens.

CLEVELAND — Cleveland Browns quarterback Deshaun Watson has been suspended six games for “egregious” sexual misconduct during massages, according to the Associated Press.

The NFL has three days to appeal Disciplinary Officer Sue L. Robinson’s decision, but the NFL Players Association said it would honor her decision.

Under the league’s collective bargaining agreement, NFL Commissioner Roger Goodell, or someone he designates, will make the decision for the league.

The league initially pushed for an indefinite suspension of at least a year and a minimum $5 million fine for 26-year-old Watson during a three-day hearing before Robinson in June.

RELATED: How Does Deshaun Watson’s Punishment Compare to Other NFL Cases?

In a statement, the NFL says it will now determine its next steps.

“We thank Judge Sue L. Robinson, the Independent Disciplinary Commissioner, for her review of the extensive records and attentiveness during a three-day hearing that led to her finding multiple violations of the NFL Personal Conduct Police by Deshaun Watson,” reads the the explanation .

“Per the contract, the NFL or NFLPA has three days to appeal the decision on Watson’s behalf. Given their findings, the league is reviewing Judge Robinson’s six-game ban and will make a decision on next steps.”

Watson can continue to train and play in exhibition games before his suspension begins in the first week of the regular season.

He will return on the road against the Baltimore Ravens on October 23. Watson is also expected to be available for his return to Houston during a Week 13 matchup against the Texans.

Watson played four seasons with the Texans before being traded to Cleveland in March.

After learning the verdict was imminent, the NFLPA issued a joint statement with Watson Sunday night saying they will not be appealing Robinson’s verdict and urging the league to follow suit.

“Every player, owner, business partner and stakeholder deserves to know that our process is legitimate and not being clouded by the whims of the league office,” the union said in a statement.

While awaiting the verdict, Watson was at training camp with the Browns. He has continued to take on most reps with the first-team offense handed to Jacoby Brissett while he is sidelined.

While the NFL pushed for a harsh sentence, the union had argued Watson shouldn’t be punished at all because he wasn’t convicted of a crime.

RELATED: Who is Sue L. Robinson, the umpire in Deshaun Watson’s misconduct case

Two Houston-area grand juries declined to indict Watson on criminal charges brought by 10 of the women.

This was the first case for Robinson, a former U.S. district judge jointly appointed by the NFL and the union to deal with player misconduct – a role previously held by Goodell.

Watson’s attorney, who announced Monday that all but one of the 24 civil lawsuits against him have been settled, issued a statement on the NFL’s decision.

“I’ve been asked repeatedly for my thoughts on the NFL’s handling of Deshaun Watson. While some of my clients have strong feelings about this, I have nothing meaningful to say about this process,” said Tony Buzbee. “I said at the beginning that the NFL’s civil process and disciplinary process are very different. My role was to advance my clients’ case in civil courts – nothing more. I did this. I am very proud of these women and the efforts of our legal team. The comparisons are confidential. I will not comment further.”

Watson, a three-time Pro Bowl pick with the Texans, has seen his playing career stalled by allegations that he behaved inappropriately with the women during massage therapy sessions he scheduled via social media. He sat out the 2021 season.

In their lawsuits, the women accused Watson of embarrassing themselves, touching them with his penis, or kissing them against their will. One woman claimed Watson forced her to perform oral sex.

Watson has denied any wrongdoing and insisted any sexual activity with three of the women was consensual. He publicly insisted his goal was to clear his name before agreeing to confidential financial settlements with 20 of the women on June 21.

The word “THE” has officially been trademarked… by Ohio State University

Taft girls’ basketball locker room to be refurbished with grant