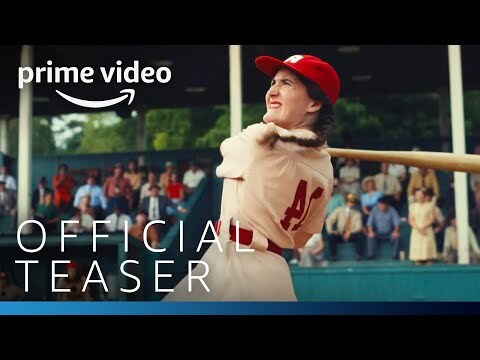 The Rockford Peaches are back and the basics are loaded in the new Prime Video series A League of Their Own, a remake of Penny Marshall’s classic 1992 baseball film.

Amazon Studios and Sony Pictures Television unveiled the series’ first look teaser on Tuesday. The teaser is set to Stevie Nicks’ “Edge of Seventeen” and plays as a speechless sizzle-reel about the WWII-era All-American Girls Professional Baseball League and the women who played in it. This time, the story features “a cast of new characters, but some nods to the original” and more women of color.

But there is no crying at first sight. Still.

The short clip conveys the look and feel of the adaptation rather than the storylines. And it’s not without a number of nostalgic elements that befit the original film. Tryouts, stellar pitches, flying baseballs and a home run-worthy sprint alongside a speeding train fill the half-minute teaser.

“‘A League of Their Own’ evokes the upbeat spirit of Penny Marshall’s beloved classic while expanding the lens to tell the story of an entire generation of women who dreamed of becoming professional baseball,” Prime Video said in one Explanation. “Taking a deeper look at race and sexuality, the show follows the journey of a whole new cast of characters as they carve their own paths onto the field, both in and out of the league.”

The project was first announced in 2018 and has changed its format over time. It was originally planned as a half-hour comedy series. Last summer, Deadline reported that Rosie O’Donnell, who played Doris Murphy in Marshall’s film, would be guest-starring in the reboot. Based on the film script by Lowell Ganz and Babaloo Mandel, the series is based on the story by Kim Wilson and Kelly Candaele.

https://www.latimes.com/entertainment-arts/tv/story/2022-06-07/theres-no-crying-in-prime-videos-a-league-of-their-own-reboot-teaser No crying in Prime Video’s ‘A League of Their Own’ teaser

What to eat now: Grub your way through this food hall in Montebello

Not everyone’s thrilled about HBO Max and Discovery+ merging