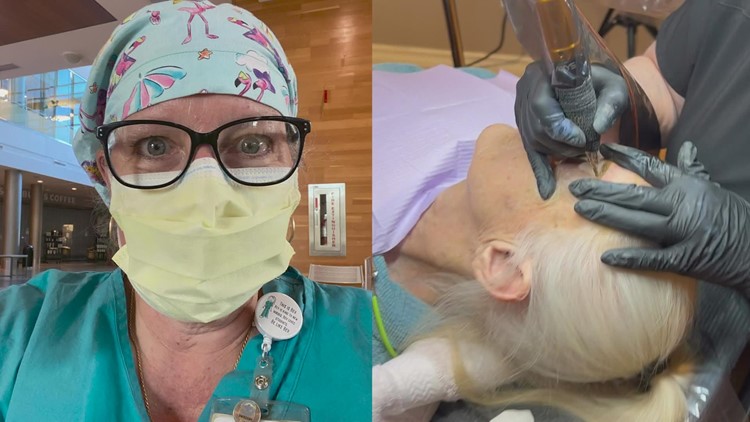 Beverly Davidson’s ultimate goal is to offer scar and trauma camouflage as a therapeutic service to those who have been injured or whose skin has lost pigment.

NORTH BEND, Wash. – A local military veteran and nurse aligns her skills with a unique field of work.

“I now divide my time between nursing and cosmetic tattooing,” Beverly Davidson said.

Davidson spent some time as an Air Medical Evacuation Flight Nurse in the Air Force and spent 11 years with the 446th Air Medical Evacuation Squadron, most recently serving as Chief Nurse at Peterson Space Force Base, Colorado Springs. She retired from service in June and continues to work as a Swedish nurse in Issaquah.

Davidson says the parallels between nursing and her new venture as a cosmetic tattoo artist run deeper than it might seem.

“My original goal was to be a scar and trauma tattoo artist,” she said. But over the past year, she’s learned that “all cosmetic tattoos are helpful and meaningful,” she says.

Some of the people Davidson has met so far in her tattooing career are a man who had his spouse’s fingerprint tattooed over his heart and a mother who wore hearts on her wrist for each of her children.

“I thought people would come in and just want a butterfly or those cute little things, but that wasn’t the case,” Davidson said. Another client came to her for a butterfly tattoo, which represents a new beginning after experiencing trauma during her military career.

Davidson continues to hone her skills as a cosmetic tattoo artist while working toward her long-term goal of offering the camouflage of scars and trauma as a therapeutic service to those who have been hurt by disease, injury, or have lost pigment to their skin. Cosmetic tattoos such as eyebrows and scalp micropigmentation are her current specialties after completing permanent cosmetology training in Oregon.

“Due to my nursing instincts, I’m being forced to really exhaust my medical training and will continue to build trauma and scar skills in the months to come,” Davidson said.

For now, Davidson says she will continue to serve her community in an unexpected profession that she believes will help restore confidence, appreciation and value.

“Creating Confidence by Intention” is the slogan hanging on the door of Davidson’s new studio. Her one-room tattoo haven is tucked away at Twin Peaks Nutrion and Wellness Boutique in North Bend.

“We’re both about wellness, so this is a great place for a symbiotic relationship, you could say,” Davidson said. It is preparing for its official opening on October 4th. People can learn more about her work on her website.

Watch: A woman trying to become the world’s youngest motorcyclist stops in Kingston

The Senate has a climate deal. Now comes the hard part

Khloé Kardashian Is Nervous About Her Daughter True’s First Day In School-‘OMG, I’m So Not Ready For This’

The Inflation Reduction Act and the U.S. Economy: The Big Picture