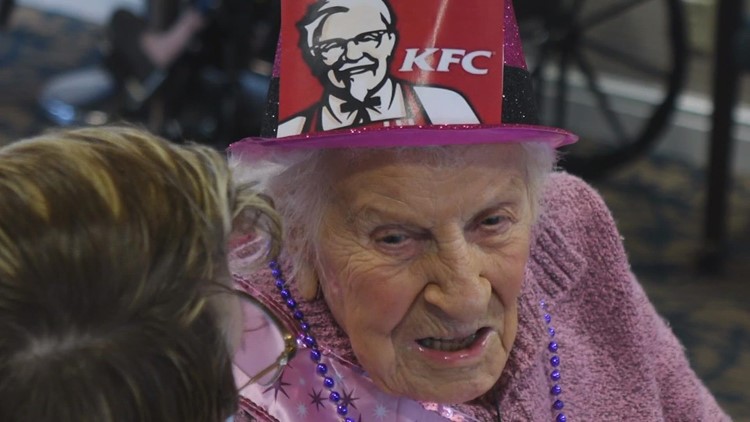 Bea Engstler was born in 1916 and moved to Washington state from Iowa.

SEATTLE — What do you give someone for their 106th birthday? According to Bea Engstler’s friends and family, “KFC and the casino!”

Bea was born in 1916 and came to Washington state from Iowa. Her son-in-law Steve Green says she traveled around the country with a friend during World War I.

“She has a bit of history,” Green said. She arrived in Washington state before I-90 arrived!”

Bea, short for Bertha, was the last child in a family of nine siblings and celebrated her special day with a few simple requests.

Aly Magdett with Northgate Plaza Senior Living said Bea made it clear that she wanted KFC fried chicken for her party.

An employee at the senior living community even wore the familiar Colonel Sanders outfit and delivered fried chicken to the birthday girl. He’s pressed about the secret recipe but keeps his personality and only smiles when guests enjoy their chicken and mashed potatoes.

Bea says the secret to her longevity is her daughter and son-in-law. “They keep me young!”

Her daughter, Cyndi Green, says three things to know about her mother are that she is German, she is “very stubborn” and she loves fly fishing.

Bea was an avid skier until her 70s and now she has a thrill at the local casinos. She says she only plays slots but her friends say bingo is worth it and she never misses bingo.

The KFC-themed birthday was attended by friends and family with an afternoon “after party” at a local casino.