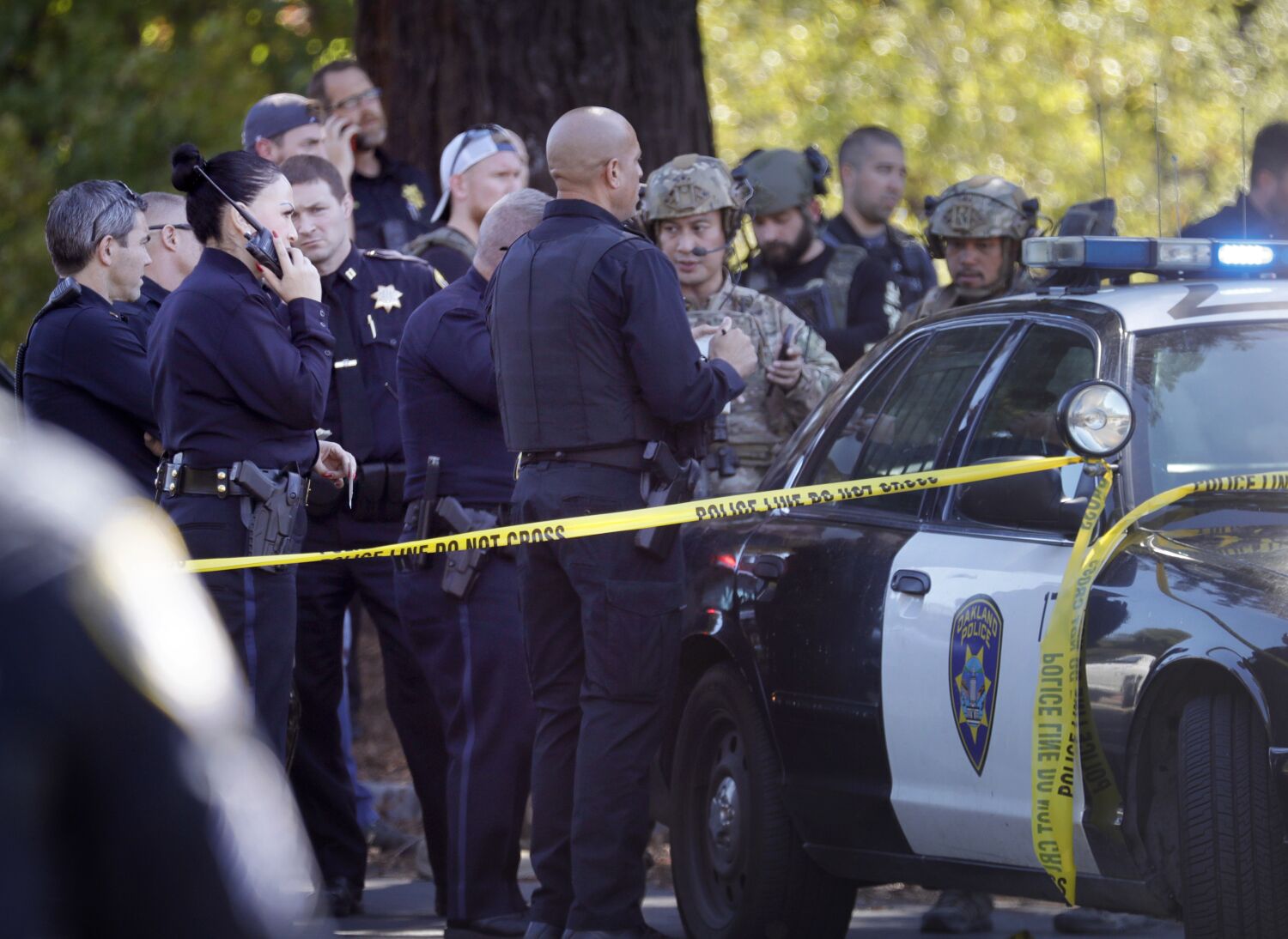 Oakland police Thursday continued their search for at least one gunman involved in a shooting on a high school campus that wounded six adults, including two with life-threatening injuries.

Although the focus is on one shooter, it’s possible “other people are involved,” Oakland Asst. Police Chief Darren Allison said during a news conference. Police have little information about the shooter and no gun was found at the scene.

Investigators are asking for the public’s help in identifying the suspect or suspects involved. Officials said they could hold a press conference Thursday afternoon to update on the investigation.

The shooting was reported just before 1 p.m. Wednesday at the Rudsdale High School portion of the King Estate campus on the 8200 block of Fontaine Street, Allison said.

The campus is home to four schools, ranging from junior high to high school, including Bay Area Technology School, a public charter school for grades 6-12, and Sojourner Truth Independent Study School, which operates an online learning program for K-12 students.

Police responded to the scene and found six adults who have “some connection to the school” who suffered from gunshot wounds, according to Allison, who didn’t say whether the shooting took place inside or outside the school but said some of the victims were found at school.

The two with the most serious injuries were reported Wednesday as critical but stable at Highland Hospital in Oakland, while a third victim was stable, according to Alameda Health System officials. The others suffered life-threatening injuries.

Allison said Wednesday that one victim had been discharged from the hospital at the last check and two others were awaiting release. Police have not specified whether the victims were adult students or school staff.

In a letter to families in the district Thursday morning, Acting Superintendent of Oakland Sondra Aguilera confirmed that Rudsdale, Sojourner Truth and BayTech will be closed Thursday. Behavioral health staff will be available to provide psychological and emotional support to students and staff upon their return to school.

“Our thoughts are with the injured and their families and we hope for a speedy recovery for all of them,” Aguilera said in the letter. “We know how traumatizing this incident is for students, families and staff alike.”

Because of the virtual facility, there were no Sojourner Truth students on campus Wednesday, said district spokesman John Sasaki, who didn’t say if staff were in the building.

The Oakland Academy of Knowledge, an elementary school, is also near the campus, but Sasaki said the shooting had no connection to the school.

Authors Grace Toohey and Christian Martinez contributed to this report.