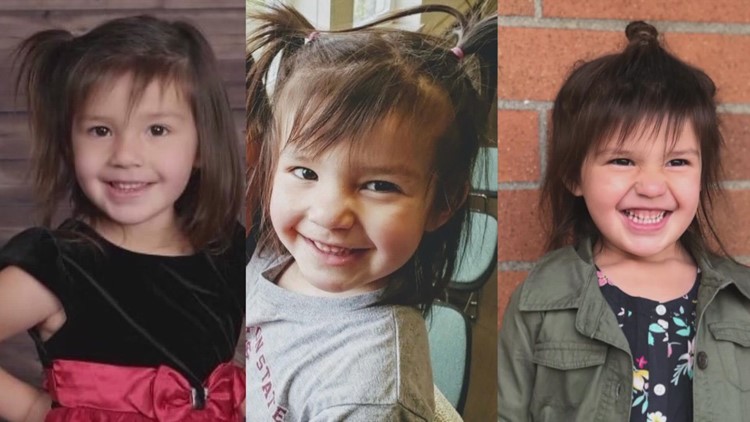 The 5-year-old was reported missing in December 2021.

GRAYS HARBOR, Wash. — A school principal first called Grays Harbor detectives out of concern about the whereabouts of a 5-year-old girl on December 5, 2021.

Detectives now believe that Carlson, from Oakville, Washington, was last seen in February 2021.

Supporters hope a new tribute video, marking the one-year milestone of her case, might prompt someone to bring out new information.

Video produced by the Missing Persons Advocacy Project Lighting the Way. It features selfies and video messages from people around the world who refer to themselves as “Oakley’s Angels”.

“We care about Oakley,” said co-founder Shayna Richard, “We will share her story and we will bring her home.”

Richard, who never met Carlson, helped set up an organization that raised more than $85,000 for a reward in Carlson’s case.

When Carlson was reported missing, Grays Harbor detectives said the girl’s parents, Jordan Bowers and Andrew Carlson, were uncooperative. The pair were eventually arrested and convicted for charges unrelated to the Oakley Carlson case.

Prosecutors said high levels of meth were found in the blood of their other children.

Andrew Carlson served his sentence and was released in August. Bowers is set for release in January.

She said she was surprised that strangers had done so much to raise awareness of the incident.

“That was amazing to me,” said Hiles, “so sweet. Just a good reminder that even in really, really difficult situations, there’s always something to be grateful for.”

Anyone with information about the incident is asked to contact Grays Harbor County at sodetectives@co.grays-harbor.wa.us

Op-Ed: UCLA rushes for the Big Ten. What about the players?