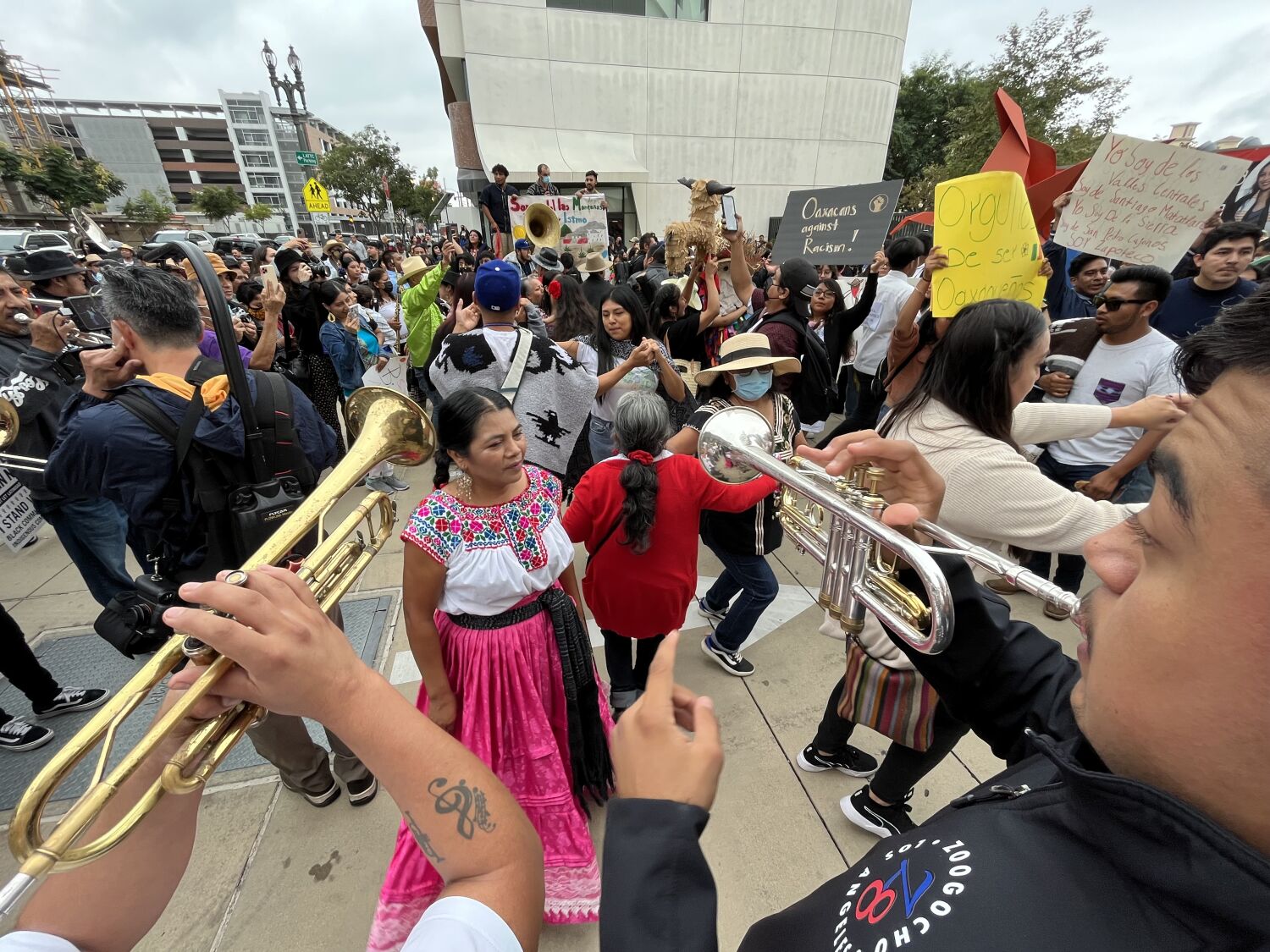 Los Angeles’ Oaxacan community gathered under cloudy skies on Saturday afternoon for a march for justice after a leaked audio recording was revealed in which some city council members used heavily racist language to disparage blacks and indigenous people, among others.

Carrying signs that read “Proud Oaxaqueña” and “Fuera Racistas,” hundreds of protesters gathered at noon on Grand Avenue in front of the Los Angeles Trade-Tech Community College near downtown. Many attendees wore traditional Oaxacan outfits, and some brought their children and grandchildren with them.

They called on all city officials involved in the audio leak scandal to resign.

“People came from all over the state,” Romero said of the protesters, “from farm workers to construction workers, because Indigenous people are essential to the economy of this city, this state and this country.”

She said it was important that the officers involved resign.

“They cannot continue to represent the highest population of the Indigenous District when they are thought and spoken of in such a despicable way,” Romero said.

“I don’t know which village they came from [from]how they got here, but boy are they ugly,” Martinez said. She added “Tan Feos” – So ugly.

Martinez can be heard making the racist remarks as he discusses how the city’s council district boundaries should be redrawn with fellow councillors, Kevin de León and Gil Cedillo, and union leader Ron Herrera.

Martinez resigned this week following the fallout from the aftermath, but Indigenous community leaders say it’s not enough. They are demanding the resignation of Cedillo and De León and a public apology from Martinez.

Los Angeles is home to one of the largest Oaxaca communities outside of Mexico. One expert estimates that up to 200,000 Zapotecs – the largest indigenous group from Oaxaca – live in Los Angeles County.

“The comments made it clear that these politicians are not thinking of us or considering us in their decisions,” Odilia Romero, director and co-founder of Comunidades Indígenas en Liderazgo, or Indigenous Communities in Leadership, said in a statement. “They don’t think of us when deciding how to allocate resources or enter public space; They don’t take into account the Indigenous people living in their districts and throughout Los Angeles.”

On Saturday, Erika Aquino, 37, arrived with her four children and her mother before the march downtown began.

The family carried signs with quotes from MLK, Muhammad Ali and Benito Juarez. One of her daughters’ signs read “Be Brown & Be Proud.”

Aquino’s parents are both from Hidalgo Yalalag, a village in Oaxaca. Her mother came to the United States in 1980.

“There has always been colorism in Mexican culture,” Aquino said. “As a brown person, I have always felt and seen how our conspecifics sometimes prefer someone with lighter skin. It’s always been a problem and I think it’s more hurtful when it comes from someone you know is yours.”

“Colorism is generally wrong, but it hurts more when it comes from your own.”

Aquino’s mother, Emma Diego, 63, said she came because she was angry.

“We voted as Democrats to put people in office who will lead us, who will be our leaders. That’s how I saw Cedillo,” she said. “But we were wrong. He said indigenous peoples and immigrants are important to him. He said that, but his heart didn’t believe it.”

“I came here so they could quit. We — Democrats, Latinos — use them… just as we use them, we can force them out.”

Rams look to put their struggles behind them vs. Panthers

Guatemalan law to protect women is used against reporters