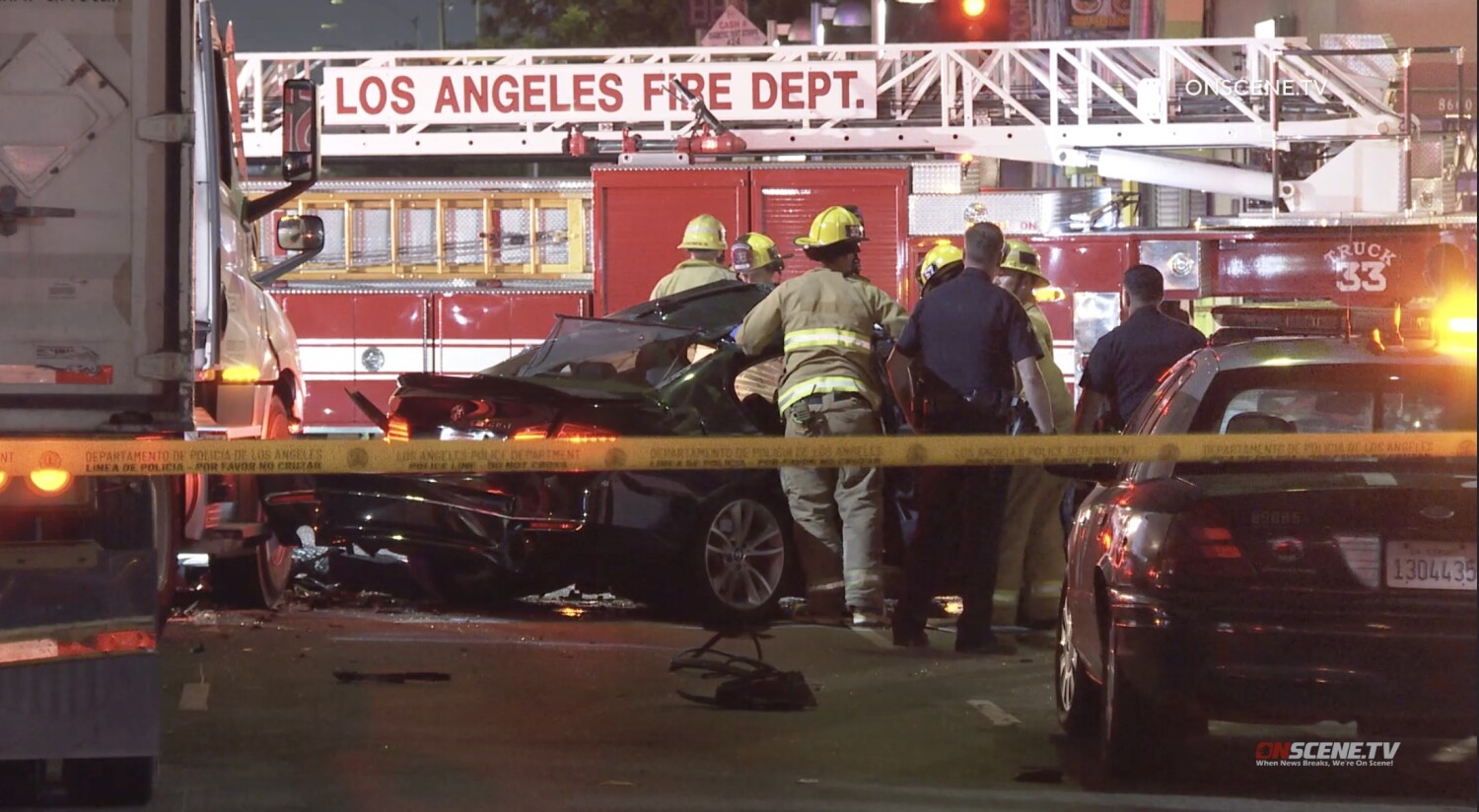 A Los Angeles police report shows that a police car was recently chasing a motorist at high speed when the fleeing vehicle collided with another car, killing two people inside, contradicting the department’s official statement that the pursuit ended before the fatal collision had been.

Janisha Harris, 35, and Jamarea Keyes, 38, were driving home from work on the morning of August 19 when the speeding motorist ran a red light and crashed into the side on Manchester Avenue and South Broadway in south Los Angeles Black BMW crashed into their car, killing them both and causing a multi-vehicle collision.

After the collision, a police spokesman insisted officers were not pursuing the vehicle at the time of the accident.

But the police report to the relatives of those who died, released this week, says nothing else. It describes how two officers at the department’s 77th Street Station first spotted and then pursued the speeding motorist.

“It was determined that the 77th Patrol Unit 12A51 was pursuing the vehicle at the time of the accident,” Officer K. Sander’s report said. The report was written on the day of the fatal crash.

“The initial reports from the LAPD said there was no high-speed pursuit, but this report clearly shows that they were engaged in pursuit at the time of the collision,” said Jasmine Mines, attorney for the victims’ families. “The LAPD is not permitted by policy to conduct high-speed pursuits for minor infractions, but that appears to have happened here.”

At a news conference outside the Los Angeles Police Department’s 77th Street Station on Friday, Mines and the victim’s families called for an independent investigation into the incident by the Attorney General.

LAPD Capt. Kelly Muniz said: “The initial statement to the media was that officers were not being pursued. Upon further inspection, it was determined that officers had continued the pursuit for 15 seconds. They broke off the pursuit before the collision. The suspect drove through a full red light that hit the victims.”

Mines and the victims’ families demanded that the department release footage from the police cars’ camera system so the public can see exactly what officers were doing that morning after spotting the speeding car.

“I want the LAPD … to stop chasing people in the streets,” said Tanya Keyes, Jamarea Keyes’ widow. He left four children while Harris left a son and a daughter.

According to the police report, the investigative team questioned both officers involved in the pursuit. The driver, who fled authorities, was found to be under the influence of cannabis and was subsequently booked on suspicion of involuntary manslaughter.

The investigator said in his report that the driver, while intoxicated, failed to stop at a red light, resulting in a fatal collision with a car coming through the Broadway intersection.

The LAPD traffic investigator found that “Vehicle 1/Party 1 attempted to evade police in a wanton disregard for public safety,” resulting in fatalities. The report noted that a review of police cruiser car video showed that the suspect drove through a stop sign and two red lights at high speed while attempting to avoid police.

Mines said the report accused suspect Matthew Smith, the fleeing driver, of wanting to disregard public safety. “But it seems that officials here also disregarded public safety in their actions,” he said.

A Los Angeles County grand jury found in 2017 that law enforcement agencies must consider the likelihood of a dangerous collision versus the chances of catching a suspect. Two-thirds of the 421 police pursuits that took place in the 12 months beginning October 2015 resulted in the arrest of a suspect, but about 17% of those pursuits resulted in a clash, the grand jury report said.

During the same period, three fleeing drivers were killed and 45 people injured, including suspects, their passengers or officers, the report said.

The grand jury cited 2015 analysis by the Los Angeles Times that showed LAPD chases resulted in bystander injuries and deaths that were more common than chases in the rest of the state.

Five questions about the release of Trump’s tax returns