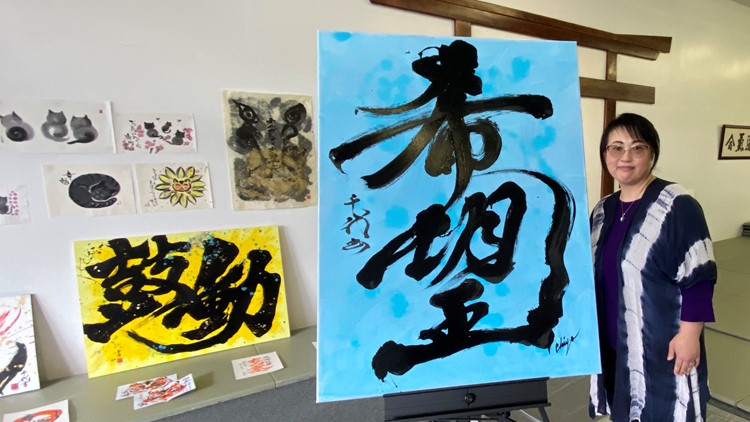 Even if you can’t read Japanese, Chiyo Sanada’s art tells a story. #k5evening

OLYMPIA, Wash. — When Japanese calligrapher Chiyo Sanada paints, more comes to the canvas than ink. She expresses herself when she creates – every brushstroke is a feeling.

“You can feel it, yes, in the color, in the texture, yes, that’s my goal,” said Sanada.

So even if you don’t know the Japanese character for “wind,” you can tell by the way Sanada moves her brush that the thick-stroked character represents a powerful storm. And the thin, airy version of the same character is a light spring breeze.

“It depends on how you use your brush strokes, and then express different types of wind.”

Sanada began studying calligraphy at the age of seven and then taught it herself in her hometown of Hiroshima, Japan.

A city known for the manufacture of calligraphy brushes. And known for being largely destroyed by a US nuclear weapon.

Her grandmother was an atomic bomb survivor.

“She loved my calligraphy. I used to make art for her and she hung it in her room.”

Sanada moved to America in 2000 after meeting and marrying a colleague from the US. Here she found inspiration.

“I used to only do black and white Japanese calligraphy, but since moving here I’ve met so many different people, ethnicities and backgrounds and it inspires me a lot, and then I started using more colors” said Sanada.

A bloom-covered pink canvas filled with the Japanese character for spring communicates the season in universal language. Another canvas has the characters for “Hope” but shows her feelings about the COVID-19 pandemic with splashes of orange in the background.

“I was sort of half angry, half upset and that was more background with my frustration. But one must not lose hope. You have to face the situation and then you can move on,” she said, using her art to reflect the same feelings many had about the pandemic.

When she first came to America, she was unable to get galleries to show her work due to the language barrier. But she didn’t lose hope. She continued to paint. Perfecting the art of quickly putting her feelings on canvas.

“It takes me a while to transfer that perfect match with my emotions to the hand, brush and then ink and do a good job.”

Today, this artist and mother teaches Japanese at a high school in Tenino and is a well-known figure on the Olympia arts scene, where she teaches workshops and gives live calligraphy performances.

Proving with every picture that art in all languages ​​connects and communicates.

After a cool, cloudy weekend, a statewide heat wave is on tap for California next week

The Orange County Museum of Art California Biennial is back