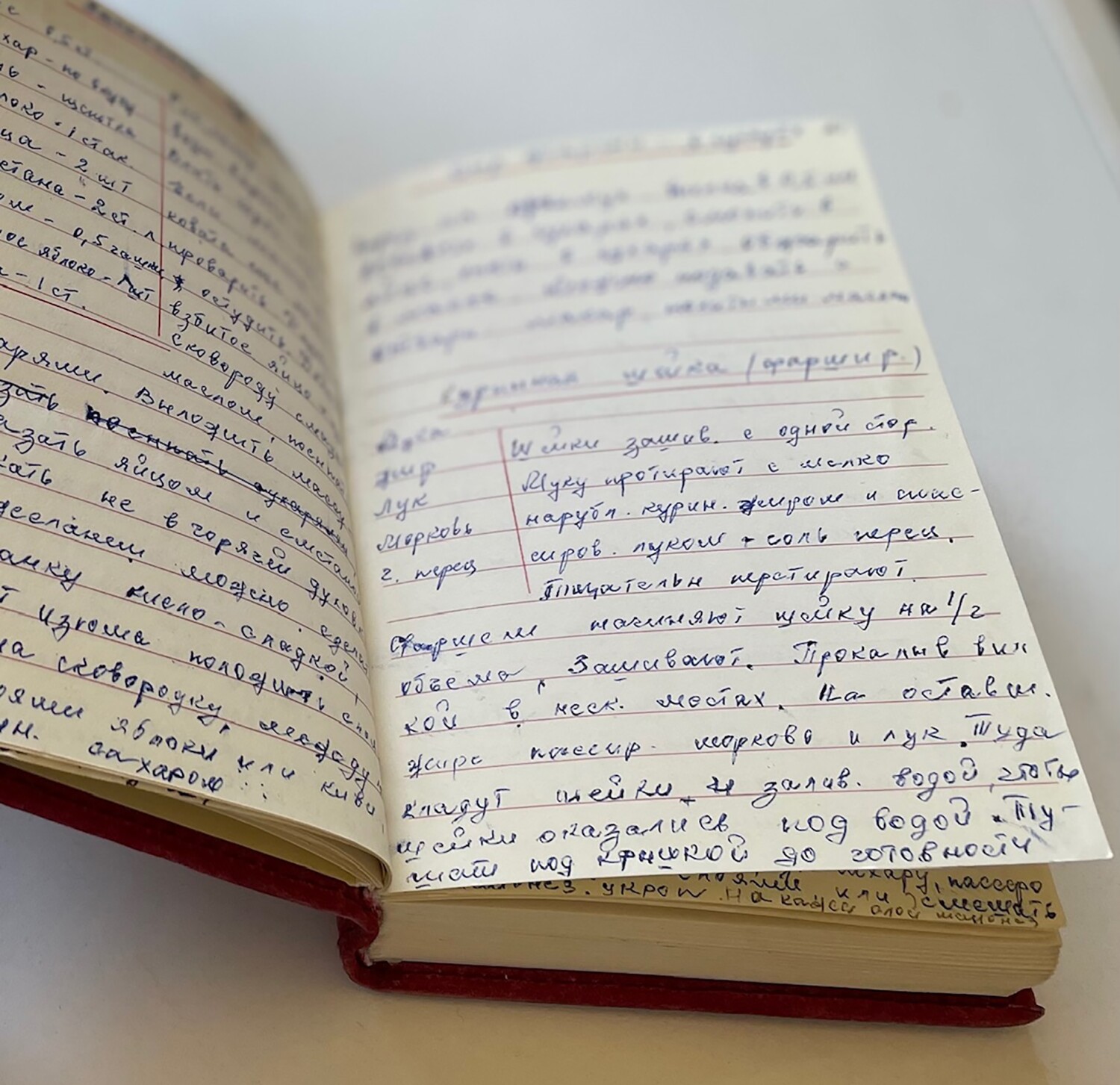 “Sew the necks together on one side. Mix the flour, fried onions and chicken fat and fill the necks with it.”

This is a line from a notebook in which my grandmother handwritten family recipes for me a few years before her death. It contains instructions for dishes that fed my ancestors in Ukrainian and modern-day Belarusian cities for generations.

The notebook has a burgundy velvet cover and a floral decoration glued on by my grandfather. My mom’s parents bought it while browsing a flea market, one of her hobbies after we arrived in America as refugees fleeing anti-Semitism and a crumbling Soviet Union. Flea markets gave them the opportunity to practice English with American neighbors and to admire jewelry they had never seen or could not afford in the USSR: a soap sculpture of a lady in a fancy hat for a quarter, a real silver ring for 50 cents (“Can you believe it!?”), a giant painting of a lake for a dollar.

The recipes have taken on a new meaning since Russia invaded Ukraine. I now hold the notebook close to me and read the words of my grandmother, who was born in Vinnytsia, Ukraine and relived Stalin’s Holodomor genocide in the 1930s, followed by the Holocaust.

Sometimes I browse for food ideas, like her recipe for chopped liver or vareniky (Ukrainian dumplings), or sauerkraut and pickles, a staple of Jewish shtetl life in Eastern Europe. Sometimes I stare at her teacher’s shorthand, seeking comfort in her neatness, or anxiously searching for random things—a Yiddish word in the middle of Russian, for example, or the handwritten table of contents with a squiggly 7—just to make sure it’s them. am still here

I keep coming back to her recipe for “stuffed chicken necks,” a poor man’s delicacy that often has no neck at all. It’s a craft project: skin the chicken, form a pouch out of the skin, then fill it with a mixture of fried onions, chicken fat, flour (or Farina) and, if you’re lucky, offal.

“Chicken necks” is a festive and tasty dish that has fed Ashkenazi Jewish families for generations and was even praised by Yiddish author Sholem Aleichem in his 1902 short story “Geese”. Nothing, not even the bird’s skin or stomach, should be wasted. “Sew them together,” my grandmother writes. Then cook, slice and serve.

As a child, I remember watching my two grandmothers sew the bumpy, translucent chicken skin together with a needle. The sight put me off the final product for years, until recently.

The notebook also contains modern recipes from the Soviet era, which was plagued by food shortages. There’s “Mimosa Salad,” a canned fish and boiled-egg appetizer that, with its zesty name, belies the simplicity of the ingredients. And “holiday potato”: Boil a potato in beet water until it’s pink.

This is how bread lasts longer, explains my grandmother: separate rye and wheat bread and wipe out the bread bin with vinegar and water at least once a week. How to remove mold from pickled cucumbers, instructs the matriarch, who fed four generations living in a Soviet two-bedroom apartment.

Some recipes have no ingredient counts. You are content with what you have.

As I flip through the pages of familiar dishes, memories flood me: the crackling of fried onions, the sweet and tangy smell of borscht on the stove, and my grandmother’s stories. She often told us about her escape from the advancing German Wehrmacht as a teenager during World War II. Her family packed what they could carry and ran to the train station. As the train, manned mostly by women and children, took them east, it was nearly hit by an air raid. A train behind them caught fire. She wanted her children and grandchildren to understand the horrors of war and the importance of gratitude and remembering one’s history.

I check my phone for the latest news from Ukraine, where the war shows no signs of abating. The stories are eerily identical to the ones I grew up with, except that the offensive is now being conducted by Russia and we write it in 2022, not 1941.

At that time my grandmother was evacuated, but her sick grandparents could not. They were slaughtered by the Nazis along with thousands of other Vinnytsia Jews. She bore the invisible scars for the rest of her life. She always stocked up on canned goods. She panicked when I was a few minutes late from playing outside.

If she were alive, how would I declare war on Russia? That her birth country is being bombed by the country she stayed in after WWII and where I was born. That our relatives in Ukraine recently fled from Vladimir Putin’s advancing troops. That our relatives in Russia were arrested and imprisoned for protesting. This story repeats itself.

I have no answers. But when I read between the lines of the little cookbook, I see survival tips and immense reserves of strength.

After all, his wisdom has withstood famine and grain theft for generations. Forced Assimilation and Gulag. Bloodthirsty dictators targeting empires. I am completely powerless to stop this war. But forgetting is not an option. As a small act of resistance, I go to the kitchen to cook.

Masha Rumer came to the United States with her family at the age of 13. Her book Parenting With an Accent: How Immigrants Honor Their Heritage, Navigate Debacks and Chart New Paths for Their Children was published in November.

https://www.latimes.com/opinion/story/2022-06-26/ukraine-russian-invasion-history-family-recipes-stuffed-chicken-necks Op-Ed: A notebook with family recipes reminds me of Ukraine’s strength

Will Finland and Sweden Joining NATO Deepen the Alliance’s Problems?

Officials plead with Californians to reduce energy use