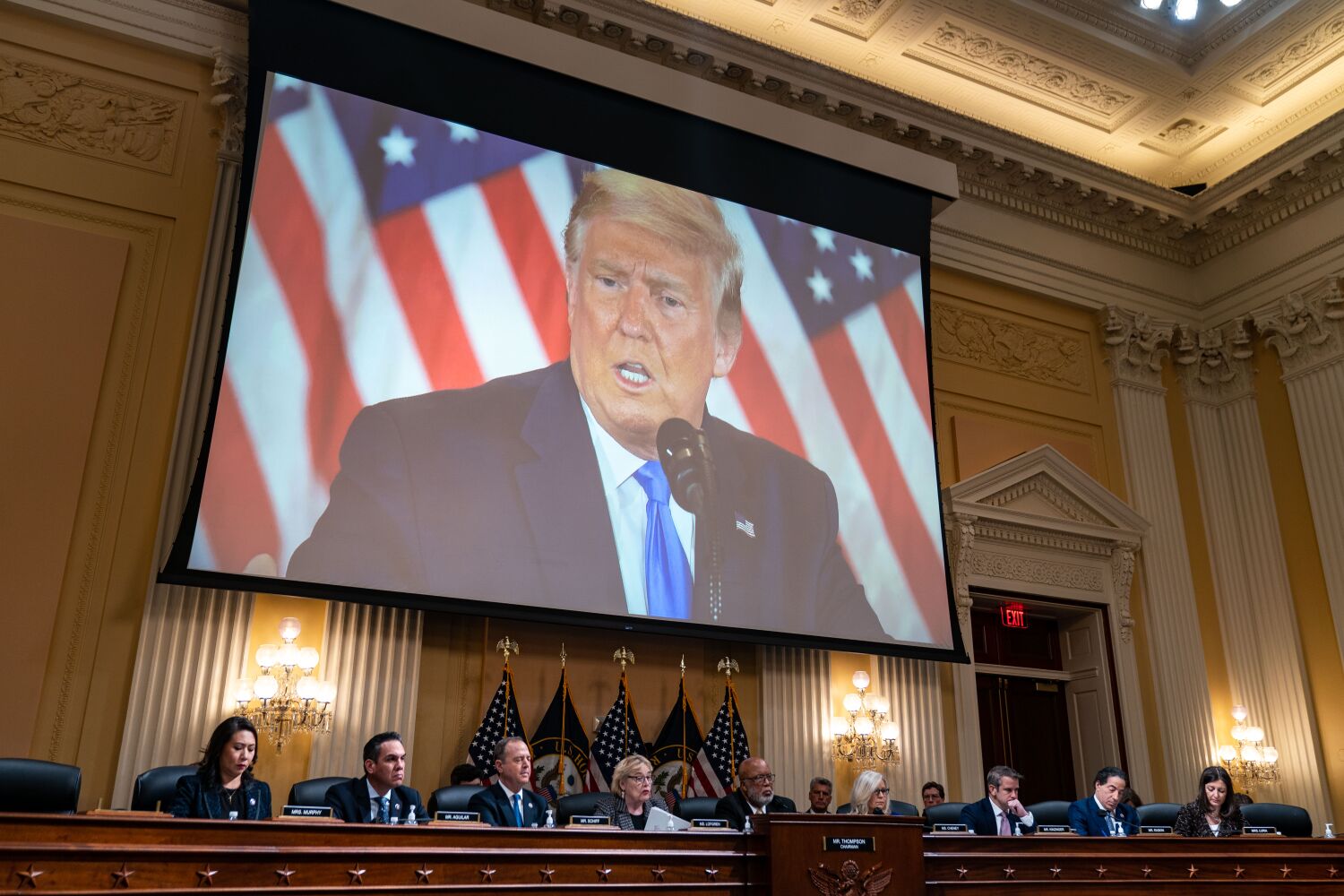 This week, the House of Representatives Committee of January 6 held its final hearing and released its final report. And we’ve begun releasing the extensive evidence we’ve gathered throughout our investigations in the form of witness interview transcripts, exhibits, text messages, emails, videos and more.

Based on that evidence — not the policy — we have referred former President Trump to the Justice Department for possible prosecution for four felonies: two related to conspiracy charges, another related to his obstructing the joint session of Congress, and the most serious involving his role in the Covers support and assistance to the insurgency.

No congressional committee since Watergate has assumed such an important duty of oversight and accountability. But it will be up to Atty. General Merrick Garland, Special Counsel Jack Smith and the capable DOJ attorneys to ensure justice.

For the four years of Trump’s presidency, the Justice Department’s position was that you cannot impeach an incumbent president. This is a misreading of the Constitution. There is no rule that precludes the nation’s leader from being charged if he is involved in criminal activity – even if, as a precautionary measure, you would defer such a trial until the end of his term. But if the department decides now, after finding enough evidence to charge Trump with a crime that prosecuting a former president would be too controversial or divisive, it would effectively immunize him, or any future president, from criminal responsibility. The founders would never have accepted such a dangerous offer.

So the Justice Department must adhere to the standard it set when it began its investigation into the January 6, 2021 attack on the US Capitol: follow the evidence wherever it leads. But protecting our democracy takes more than oversight, accountability, and even justice.

It also needs to be reformed. In the committee report, we laid out several steps Congress must take to prevent another would-be autocrat from tearing down our democratic institutions and halting the peaceful transfer of power.

One of those key reforms is included in the year-end total expenditure account and will reform the 19th-century Electoral Count Act, the statute that governs the congressional process used to confirm the winner of a presidential election. It was this archaic law that Trump sought to exploit by pressuring his own vice president to reject the states’ legitimately chosen voters and declare Trump the winner. As part of this new reform, Congress reaffirms that the vice president has no such power and that a state cannot change the rules governing voter nominations after an election to effectively nullify the popular vote of its constituents.

Even now, committee subpoenas are being tried in court, their enforcement stalled by the contentious practices of Trump and his enablers. When the current session of Congress ends on January 3, 2023, these subpoenas will lose their force, even if the new majority were not anxious to thwart our work. Congressional subjects should never again be able to evade oversight by exploiting the courts’ frigid speed.

We must also confront the rising tide of bigotry and the rising threat of racially motivated violent domestic extremism. The January 6 riot was not only a response to Trump’s “big lie” in which he claimed massive fraud, it was also an attack on our institutions by white nationalist groups bent on backing a president who is with fully agreed with her cause. If we don’t address these threats, we will continue to leave our country and our democracy vulnerable. For this reason, our committee recommends reforms aimed at achieving a whole-of-government approach to countering national violent extremists and violent anti-government militias.

Other key reforms would limit the applicability of the insurrection law, which Trump supporters have been urging him to justify using force to stop the joint session of Congress. We should also clarify who has the authority to seek a court order barring an insurgent from office under Section 3 of the 14th Amendment, address the role that social media plays in radicalizing people, protect campaigners from threats and intimidation protect and much more.

As the 9/11 Commission completed its report, its members spent the next few years—along with the families of the victims of that horrific tragedy—arguing to the country and to Congress why reform was so important to thwart another attack impede. There may be a similar role for our nine members, including those about to leave Congress, in getting these new safeguards into law.

The January 6 committee’s oversight was difficult, and the pursuit of justice may be even more difficult, but the steps we are taking to prevent another despot from undermining our democracy in the future are perhaps the most challenging and momentous of any everyone.

Democrat Adam B. Schiff is a member of the House Select Committee investigating the January 6 attack on the United States Capitol. He represents the 28th congressional district of California.

Winter storm flight delays and cancellations: These apps could help

Jan. 6 panel: Trump’s call to march on Capitol was planned

When Will the Selling Stop?

Orange County to pay $480,000 over delayed treatment of pregnant inmate who miscarried