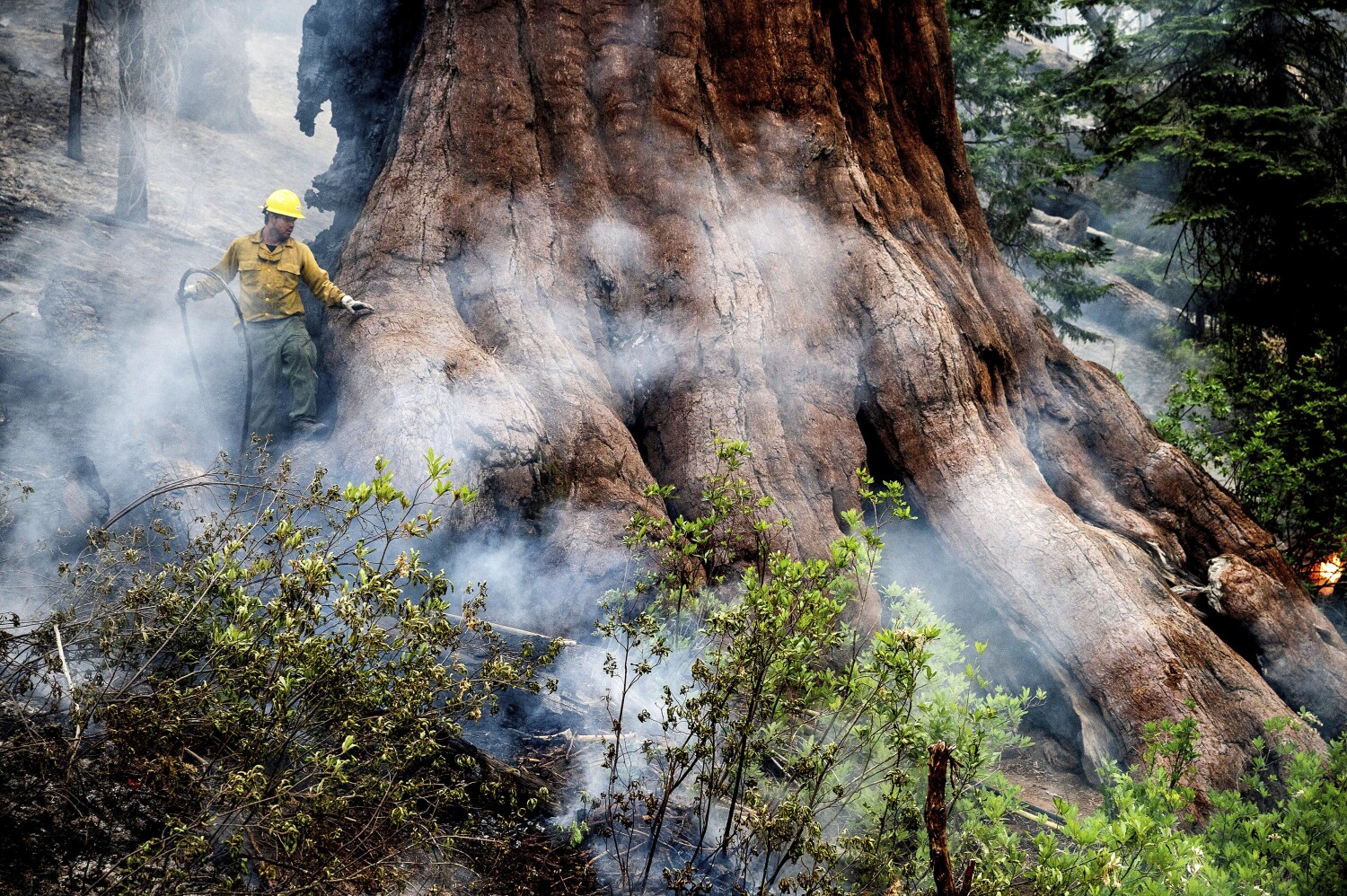 Californians are shutting down their irrigation systems to reduce water consumption amid a devastating climate drought. In Yosemite National Park, sprinklers were turned on in hopes of slowing the climate-driven Washburn Fire that threatens the Mariposa Giant Sequoias Forest.

The difference is instructive. Embracing brown lawns is a proactive commitment to a more climate-resilient landscape. The Mariposa sprinklers, deployed to protect iconic trees like the Grizzly Giant, are a denial of the climate reality that has made the Sierra increasingly vulnerable to wildfires.

The same denial is evident in the two questionable ideas that underpin the concerted effort to contain the Washburn fire—conservativeism and fire-extinguishingism.

Starting with conservation properties, the concept that some places are so special that they should be set aside and maintained unchanged over time. Naturalist John Muir made this case for Yosemite and Mariposa Grove. The second letter, he wrote to a friend in 1869, is unique because it shelters so many giant sequoias and does so “in all the grandeur and majesty of nature undisturbed.”

Muir will spend his life protecting what he believes is a holy and unaffiliated holy place. In 1902, while guiding President Theodore Roosevelt through Yosemite to convince the conservation superintendent that the state park at the time needed federal protection, their first stop was Mariposa. Grove, “the solemn temple of the giant sequoias”. Four years later, during Roosevelt’s second term, the national park became a reality.

Conservationism was incorporated into the National Park Service’s 1916 founding act. The mission of the new agency is to “preserve the landscape and the natural and historic objects and wildlife therein and provide the people with the same enjoyment in the same manner and by means of as well as will leave them untouched for the enjoyment of future generations. “

The difficult requirement to maintain these landscapes forever untouched is one reason why firefighters repeated sprinklers around the nearly 3,000-year-old Grizzly Giant. It’s “preventive first aid,” said forest ecologist Garrett Dickman in a video posted on the Yosemite website two days after the Washburn fire was reported. “We really didn’t want to give this tree a chance, because it’s truly an iconic tree.”

The decision of the fire managers to throw all available resources, man and machine, at the Washburn fire, was also in effect. No park director wants to be in a position of losing bonsai, a fear that emerged in 2021 when the Windy and KNP Complex fires tore through the Sequoia National Forest, as well as the National Parks. Kings Canyon and Sequoia, burning down a large number of trees.

The history of intelligent fire management, as opposed to putting out fires, may have helped protect Mariposa Grove. A US Forest Service spokesman told The Times that burning and dilution regulations played a role in preventing the Washburn fire in the park.

But regulated burning can be an uncertain, controversial tool. Consider the harsh criticism the Forest Service issued in May when a regulatory fire ignited the Hermit’s Peak-Calf Canyon fire, which consumed forests, towns and ranches across the country. over 340,000 acres in the largest fire in New Mexico history.

Of course, that’s not what fire managers want. Quite the opposite: Regulatory fires introduce controlled, less destructive (some say rebound) fires into forest ecosystems designed to burn periodically. They have a mostly positive track record – 99.84% of the time they go as planned, according to the Forest Service. However, when either of those things don’t happen, the backlash will be severe.

New Mexico federal and state politicians want the federal government to bear all of the costs of the Hermit’s Peak-Calf Gorge fire – including compensation for fire victims – and they are calling for an immediate halt to the work. controlled use of burn medicine everywhere. Forest Service Superintendent Randy Moore complied, announcing a 90-day nationwide moratorium to conduct a “learning assessment,” effectively preventing preemptive action during the hot summer months.

By contrast, there are no obvious public relations or political consequences to outright repression. Indeed, the praise the Parks Department and other agencies have received for the fervent assault on the Washburn fire is a clear incentive to act with dispatch whenever and wherever a fire is. forest outbreak.

That said, avoiding conflict is rarely good public policy, especially at a time when government agencies must make informed, long-term decisions about how to respond to the dramatic impact of climate change. climate change is having on the landscapes they manage. Parks and national monuments cannot be “set aside” from reality.

For the Park Service, this calculation is especially important. After all, climate change not only alters historical weather patterns, lengthens fire seasons, and realigns long-standing ecological relationships, but it also disrupts conservation principles. founder of this agency.

As much as Washburn’s firefighting tactics give Yosemite lovers a sigh of relief, the Park Service needs to acknowledge that the installation of sprinklers protects the giant sequoias from the conversions that an operator The warming planet liberated in Mariposa Grove and elsewhere is meaningless.

Its concessions must also be ours. We cannot irrigate our way in the context of climate change. Not for our grass or for our groves.

Char Miller is a professor of environmental history at Pomona College. His new book, “Natural Consequences: Intimate Essays for a Planet in Danger,” will be published in September.

Facts Ruin a Narrative About Hate Crimes at HBCUs