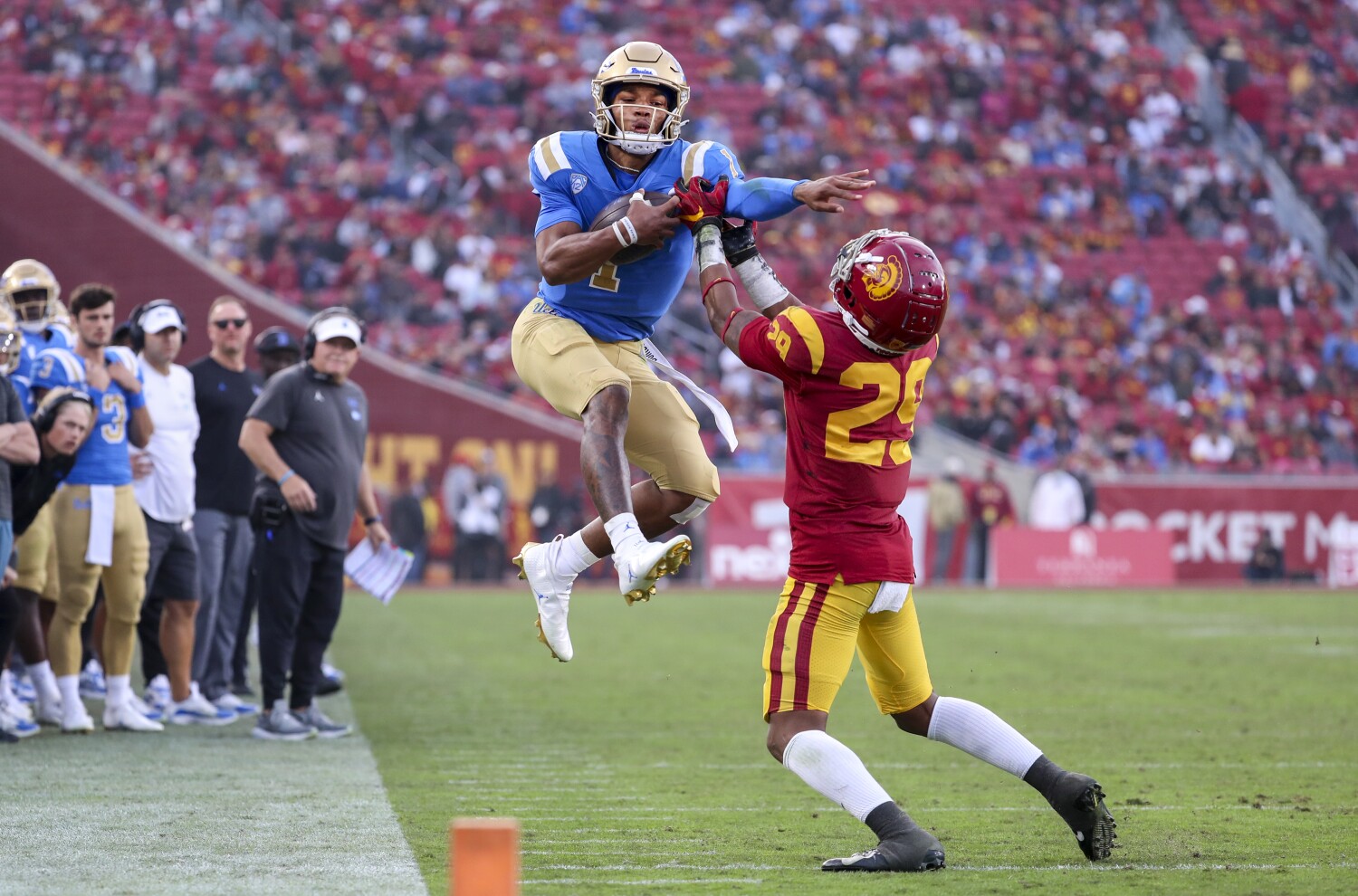 With Russia’s assault on Ukraine, the Supreme Court’s assault on liberality, the GOP’s assault on truth and democracy, and the never-ending assault on senseless gun violence, the term June gloom took on new meaning last month. For many of us, sport remains a great escape from it all. An ointment. And then came the kicker on June 30: USC and UCLA would break out of the Pac-12 conference and join the Big Ten in 2024.

Then the Times confirmed it. Path.

In doing so, the roughly 100-year tradition — a word commonly used by both universities — was out the window, essentially destroying the Pac-12 for the other 10 member universities, including UCLA’s big sister, Cal. No more regular, meaningful competition with Stanford, Oregon and Washington, Utah or the Arizona schools. For real?

What in the names of Tommy Trojan and the gutty Little Bruins is anyone thinking? Who benefits here?

Those in power, USC and UCLA athletic directors Mike Bohn and Martin Jarmond, claim the move will give “student-athletes” better starting times for football games and, in turn, more national television exposure.

Sure, West Coast teams have always suffered a little from East’s late start times, but no one ever suggested that this was a life-and-death situation worth cutting your conference short. Not to mention student athletes being forced to take absurdly long flights to the Games, which means more hotel rooms, more off-campus time and academics – remember?

As for the fans, which fans? Trojan and Bruin fans may be scattered all over the place, but the vast majority live in Southern California. Who flies to New Jersey for a Rutgers football game, let alone a swim meet or a gymnastics competition? Maybe those few boosters that have private jets, that’s them.

Welcome to another episode of Follow the Money, this one about the millions that the Big Ten’s TV deal distributes among its member schools each year. According to one estimate, the deal could be worth $1 billion by 2024, with average revenue per school exceeding $60 million. As opposed to just over $30 million that the Pac-12 was offering last year before the pandemic. That extra $30 million is a lot of “resources,” as Jarmond put it, and UCLA wants you to know that their real motivation was altruistic to keep “non-profit” sports on campus. Uh-huh.

And then there’s the power play on a shrinking playing field. The Southeastern Conference has run away with college football in recent years, and the Big Ten has pumped a lot of iron to stay on par. As they trade blows, the ground beneath everyone else shakes and shakes. Just last year, Texas and Oklahoma broke from the Big 12 to join the SEC, providing a paradigm for someone at USC.

According to The Times, that someone appeared to be none other than Rick Caruso, the mall developer-turned-politician who happened to be USC’s board of trustees up until February. That would be the same Caruso who was a life Republican until he decided to become mayor of Democratic LA. He’s obviously not averse to a change of allegiance.

Over on the UCLA sidelines, the Pac-12 heist looks like nothing but a terrifying fear — sending its crosstown rival to bigger things and defaulting on a massive debt racked up by his athletic programs.

Jarmond, 42, a sophomore at UCLA, has deep roots in the Big Ten, where he was assistant athletic director at Michigan and Ohio states. For him the Big Ten is Tradition. In a shaky interview with ESPN, he sounded like a man trying to explain why he traded his childhood sweetheart for a plus one with a trust fund.

Bohn, on the other hand, was born in the Midwest and raised in neighboring Midwest Colorado. He’s held more senior AD jobs than you can swing a USC drum major’s sword. At the University of Colorado, he was instrumental in getting the Buffalos into the Pac-12. Bohn gives and he takes. He’s an empire builder – his own.

Neither AD is a match for the biggest players behind the scenes: Fox and ESPN, who are secretly rigging a big-money Monopoly game. Which raises some questions: Do we agree that collegiate sports are more or less run by TV networks? Is it cool that student athletics is more or less under the spell of the corporate giants? Is it winnable at all costs? Is this the yardstick by which these academic institutions want to be measured?

Lest we forget where there are winners, there must also be losers. Jon Wilner of the San Jose Mercury News, who first broke the story of the conference switch, says he thinks this is the beginning of the end for major college football programs at Cal and Stanford in the Bay Area. “Fox and ESPN will pay for the football programs that generate ratings and will most likely end up in prime television windows,” Wilner said in a Q&A published in Mercury News. “None of the Bay Area teams are vacating these bars.”

USC and UCLA clear these bars for victory. But they certainly lost something in the mercenary trial. Call it character. Certainly some will cheer; others call it ugly win.

What does all this mean? “Sometime in the near future,” Wilner added, “college athletes will likely be made employees or pseudo-employees and compensated by schools for their services. There’s no chance Stanford would ever do that, and we doubt Cal would take the plunge. On both campuses, the faculty would revolt as if it were Paris in 1789.”

And what does that tell us about USC and UCLA?

Tom Christie, who graduated from UCLA with a degree in Film and Television, splits his time between Los Angeles and Berlin.

https://www.latimes.com/opinion/story/2022-07-07/usc-ucla-pac-12-big-10-conference-student-athletes Op-Ed: USC and UCLA won ugly when they defected to the Big Ten