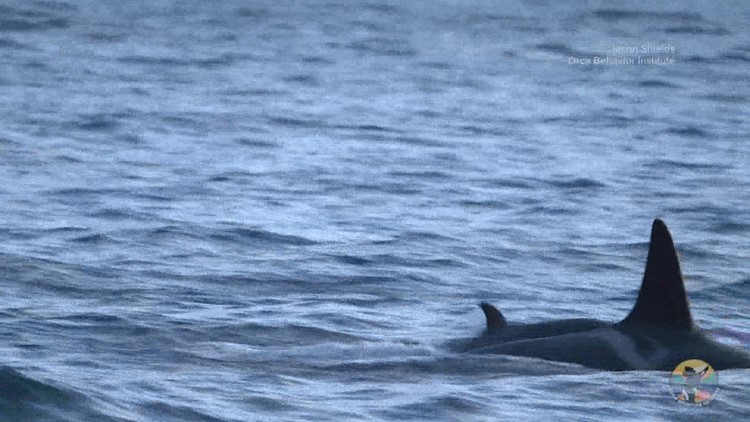 It is estimated that the young calf is only a few months old and its future is still up in the air.

SAN JUAN, Wash. — Orca organizations had lost hope for the future of a family of Southern killer whales known as the K Pod. However, on Saturday, the Center for Whale Research shared photos of the newest member of the group. It is the first calf born at K Pod since 2011.

Video shared by the Orca Behavior Institute shows the mom and baby off the coast of the San Juan Islands along Haro Strait on Saturday. The Center for Whale Research said the two have also been sighted on the west side of Vancouver Island.

“It’s always a rush of excitement when we see a brand new baby in this vulnerable population,” said Monika Wieland Shields of the Orca Behavior Institute.

Shields caught a glimpse of the calf on Saturday night.

“When I saw this tiny whale emerge, even from a distance I knew it would be the newest calf and it was super exciting to see it alongside K20, who is the putative mother,” Shields said.

For the first time this summer, members of all three Puget Sound pods of orcas were spotted together in Haro Strait, but K20 and the new calf named K45 stood out. This is believed to be K20’s first calf in 18 years.

“We hope this is a sign that K Pod is turning a corner and that they are able to eat enough to successfully reproduce and raise offspring,” Shields said.

“We kind of gave up. I mean, you never give up on trying, but you’re not really sure if K20 would have another calf because it’s been so long,” said Howard Garrett, co-founder of the Orca Network.

K20 is 36 years old. Garrett said K20 was mistaken for a male until the birth of her first calf in 2004. Garrett hopes the newborn is female, but the newborn’s gender is still unknown.

“The icing on the cake looked good on this calf,” Garrett said. “Where an orca is white, this calf is white and when they’re newborn they’re very orange…when they get that nice shade of white it’s a good sign they’re thriving.”

It is estimated that the young calf is only a few months old. The future is still in the stars and the next few months will be crucial for survival. From afar, the researchers will be watching closely.

“We look for energy levels. We’re seeing if this little calf starts to explore a little,” Garrett said. “Of course mom will keep a very close eye on and call the baby back if necessary, but just to see if there’s a lot of spark in this little calf.” plugged.