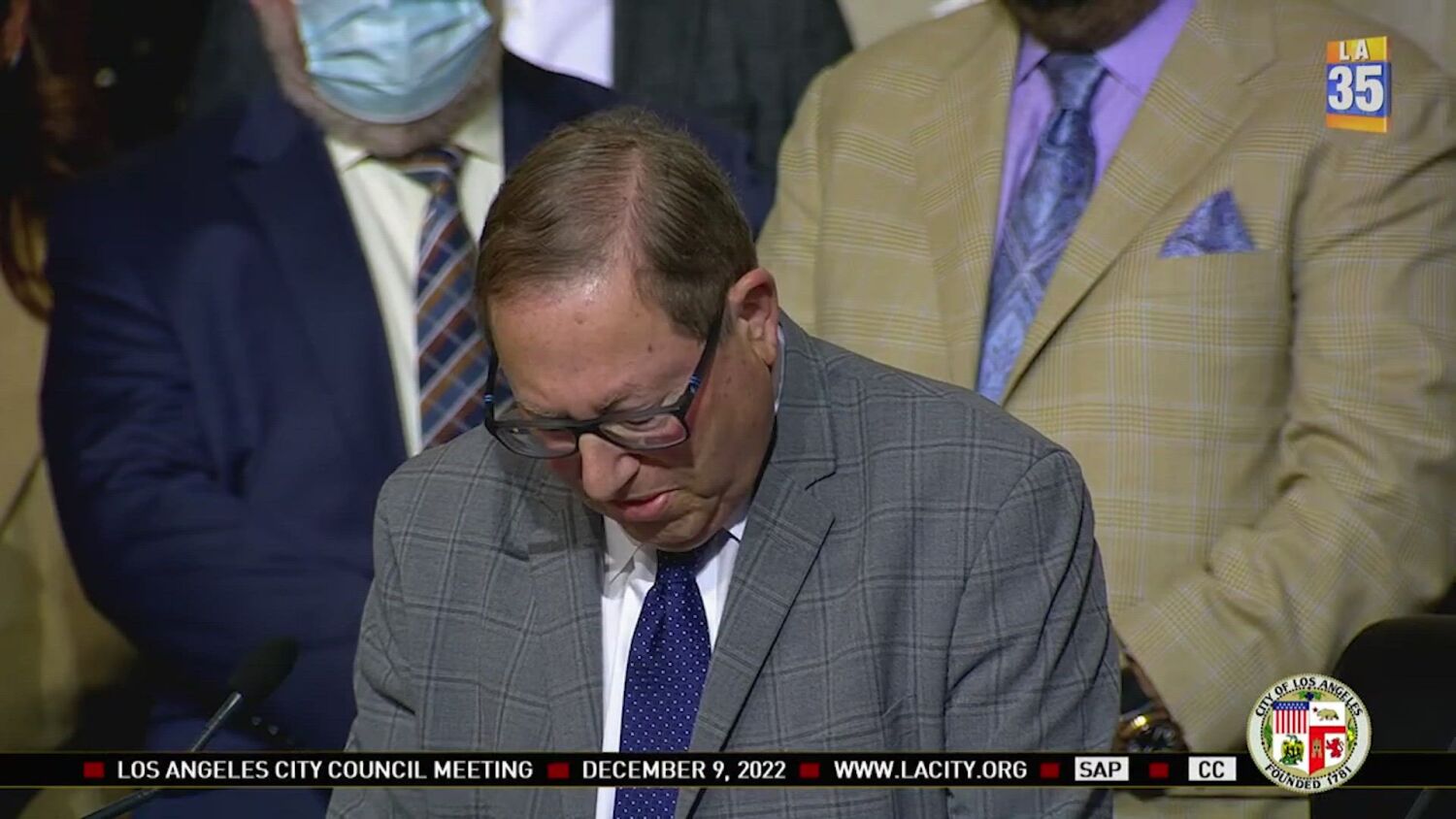 Outgoing Los Angeles City Councilman Paul Koretz used his final moments while speaking at the council on Friday to deliver a succinct message to the protesters who have become ubiquitous at City Hall in recent years.

After a video montage honoring his tenure, heartfelt tributes from his peers, and a proposal to rename the Westwood Neighborhood Greenway in his honor, it was time for Koretz to speak.

For about 15 minutes, the sacked councilor mused on his love of politics and activism, his long career in public service, and his family.

He greeted the new Council member who will soon be taking his place, then abruptly changed his tone.

“So I want to say in their own words to the disruptors and protesters who have done their best to make it difficult for us to make our jobs harder for the last two and a half years: I’m giving up the rest of my time. F— you,” said Koretz, and a smile crossed his face.

His fellow councilors erupted in applause as some of the staff behind him jumped up and down and clapped. Several other council members appeared to give the speech a standing ovation.

“I just have to say I didn’t warn Gail or anyone else that I would say that,” Koretz said, referring to his wife.

The pairing of a waste of time with an expletive was first uttered during a June 2020 LA Police Commission meeting, which came after days of protests following the killing of George Floyd by a Minneapolis police officer, and has become a buzzword among certain local policy observers.

During that meeting, many speakers called for the resignation of Los Angeles Police Chief Michel Moore for referring to people who broke into stores during the protests that Floyd’s death was “as much on their hands as it was on these.” [Minneapolis] officers.”

Moore apologized for the remark and walked back, but the virtual meeting remained tense as officials heard caller after caller demanding the boss’s resignation, saying he was unfit for the job and raising concerns about the department and the police state in Los Angeles.

But it was Jeremy Frisch’s comments after nearly eight hours of session that stood out.

Rehearsed until they fit within a roughly 30-second window, Frisch’s words grew increasingly angry as he shouted excessive force at peaceful protesters.

Turning to Moore, he called the chief a “disgrace” and ended his comments with, “I’m wasting my time. F- you.”

Protesters have since jokingly referred to it, but it addresses serious issues, Sergienko said. The activist said he found it ironic that Koretz swore in the chamber after so many shouts of decency were made by members of the council in response to protests.

On Twitter, some people called the outgoing councilor’s use of the phrase “sad,” while others lamented his attempt to co-opt a phrase used to protest police brutality. Several people simply tweeted images of the vote count for Koretz’s failed LA City Controller bid.

Protesters have had a constant presence at council meetings in recent months after leaked audio recordings of a 2021 racist conversation between council members Gil Cedillo, Nury Martinez and Kevin de León, and Ron Herrera, then president of the Los Angeles County Federation of Labor.

The protesters’ frequent chants have vowed to suspend gatherings until both Cedillo and De León step down. The LAPD’s process of removing the protesters — usually one at a time or in pairs — typically takes up the first 45 minutes of each meeting.

Taylor Swift is set to direct her first feature film

Fight leads to stabbing inside Acme in Upper Darby, Pennsylvania

California storms: Dry winter was predicted. Why so much rain?