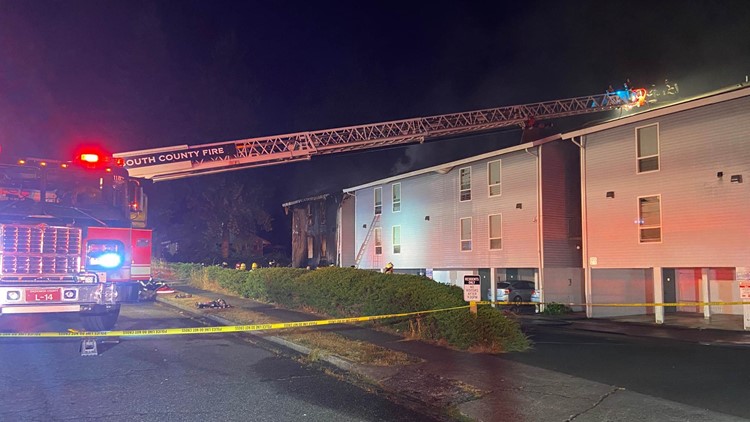 Eleven adults and four children were displaced by a 2-alarm fire at a Lynnwood apartment complex early Tuesday morning. No injuries were reported.

LYNNWOOD, Wash. — More than a dozen people have been forced from their homes after a 2-alarm fire broke out at an apartment complex in Lynnwood on Tuesday morning.

South County Fire crews responded after midnight to a report of a car fire at an apartment complex on the 19300 block of West 46th Avenue, which is north of the Fred Meyer store at 196th Street.

When firefighters arrived, they saw that the fire had spread to the apartment complex and called a second alarm. Fire in the South Ward tweeted shortly after 1:45 a.m. that the fire was under control.

Officials at the scene told KING 5 that eight units were damaged and 11 adults and four children were displaced from their homes. The Red Cross arrived on site and brought the 15 residents to a nearby hotel.

Neighbors told KING 5 they could feel the heat from the fire across the street.

#BREAK 15 people including 4 children displaced after 2 alarms fire in Lynnwood. Crews believe it started in the carport, no injuries. Neighbors say they felt the heat across the street. @KING5Seattle pic.twitter.com/Vqu04PzRzG

“It was just nerve wracking,” a neighbor told KING 5. “You know, seeing something like that burst into flames. I mean it was fast and fire is a very dangerous thing.”

No injuries were reported. The cause of the fire is being investigated.

A 2 alarm apartment fire in Lynnwood has displaced 15 people from 8 units. 11 adults and 4 children. Luckily no injuries. It is believed that the fire started in the carport and spread from the roof of the first building to the second building. pic.twitter.com/l2SSZksbDs

https://www.king5.com/article/news/local/lynnwood-apartment-fire-46th-avenue-west/281-7b8b0dd5-3a6c-45ac-8830-0d8b24cd97b5 Over a dozen people displaced after fire at Lynnwood apartment

Whistleblower accuses Twitter of being 'grossly negligent' towards security

How Biden is navigating his rocky relationship with McCarthy

The ‘Great Resignation’ Started Long Ago