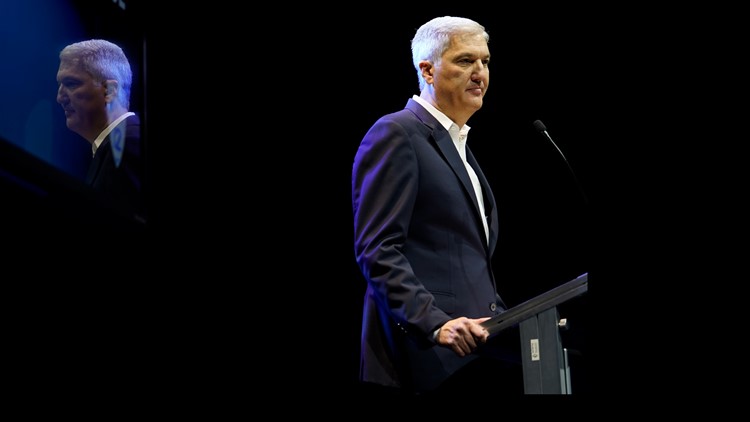 The Pac-12 commissioner said he disagrees with the direction college football is taking but is still optimistic about the future of his conference.

LOS ANGELES — Pac-12 Commissioner George Kliavkoff said his conference is far from over, despite defectors from Southern California and UCLA.

Confirming that the Pac-12 is actively exploring expansion, Kliavkoff delivered several lively jabs to the Big 12 during an eventful opening speech at the football media day of his conference on Friday in the country’s second-biggest media market.

While Kliavkoff painted a promising picture of the league’s future even after USC and UCLA join the Big Ten in 2024, he said the Pac-12 intends to retain its current members while entertaining newcomers.

The commissioner also admitted his frustration at the upheaval caused by the shocking decision by Los Angeles schools, saying he’s spent the last month “fighting back against grenades being thrown in from every corner of the Big 12.” to destabilize what remains of our conference.”

Kliavkoff responded to Big 12 Commissioner Brett Yormark’s recent statement that his league was “open to business” by suggesting those moves could also include Big 12 schools coming his way, rather than assuming the opposite.

“In terms of the Big 12 being open for business, I appreciate that,” Kliavkoff said. “We haven’t decided yet whether we’re going to shop there or not.”

Kliavkoff later told The Associated Press he was keen to speak out colorfully in defense of the Pac-12.

“I wanted to exude confidence in the conference, because that’s what I see from our presidents and chancellors and sporting directors,” said Kliavkoff. “It’s my job to deliver that message, and I love doing it.”

Still, after a century of history, the Pac-12 has lost its flagships in Los Angeles, and Kliavkoff acknowledged the widespread speculation about the long-term health of its comparatively underfunded West Coast conference. The commissioner insisted that the Pac-12 will have a stronger base after its new media rights deal and that this base could lead to expansion.

Kliavkoff understandably did not identify any specific schools as candidates for expansion, although San Diego State has been mentioned repeatedly by others. He reiterated the league’s determination to maintain a football presence in the talent-rich, densely populated end of California.

The two-year transition is an odd challenge for all parties, but Kliavkoff said he has instructed everyone to treat the Trojans and Bruins with due respect. Both USC coach Lincoln Riley and UCLA’s Chip Kelly say they are on board with a move that will dramatically increase both their schools’ revenue and their recruiting reach.

“It’s an uncomfortable situation for everyone,” said Kelly, who rose to become a coach in Oregon 13 years ago. “I’ve had great experiences in this league. I owe my life to the Pac-12. I appreciate what this league has done. … It is what it is. It’s a realignment. It goes on, ruled by television. Those are things that are beyond my control.”

Kliavkoff speculated that the remaining Pac-12 schools will likely receive a significant boost in recruiting fertile Southern California in all sports except soccer, since many Olympic athletes and their families do not want to fly to the Midwest and East Coast regularly for the competition .

He reiterated that the Pac-12 expects to retain its remaining members, despite widespread speculation that both the Big 12 and Big Ten plan to expand. Oregon and Washington were linked with a future move to the Big Ten immediately after USC and UCLA announced their departures, while the Big 12 were linked to schools in Arizona, Utah and Colorado.

Kliavkoff is confident after having held two board meetings a week with his members for the past four weeks.

“Looking my colleagues in the eye and understanding their commitment that their first priority is to ensure the Pac-12 survives, thrives and grows and is successful,” said Kliavkoff. “You are committed to the conference.”

Defending champion Utah coach Kyle Whittingham, who saw the big picture, expressed a wait-and-see attitude among many observers of this upheaval conference.

“I think the real proof of the pudding of this is going to be the media rights deal, see how that comes out,” Whittingham said. “If those numbers are right, absolutely (the Pac-12 is still viable). If these numbers are not where we need them, then look at other options. It seems very consistent at the moment, the Pac-10 – the 10 that stay – and we’ll see how it goes.”

Kliavkoff also kept the door open to a highly unlikely return for UCLA: The public school was snapped by California Gov. Gavin Newsom for the move, and the UC Board of Regents has ordered a review of the decision at a hearing scheduled for Oct. 21 . 17

“I would say UCLA is in a really difficult position,” said Kliavkoff. “There are many voters associated with UCLA who are very, very, very unhappy with the decision. Student-athletes, the families of student-athletes. The faculty, the staff. The politicians, the fans, the alumni. …I can’t give you a percentage chance. I think it’s unlikely. But if they came back, we would welcome them back.”