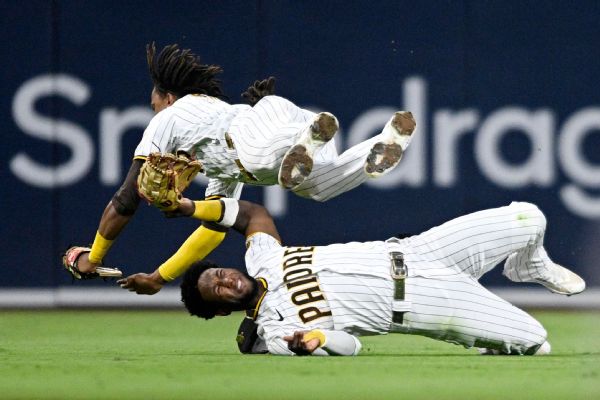 SAN DIEGO — Padre’s left fielder Jurickson Profar collapsed trying to walk off the field after a scary collision with rookie shortstop CJ Abrams and was then placed on a stretcher and carted away on Thursday night.

Profar was transported to UC San Diego Health for further evaluation, the team said. No update was immediately available.

“No tingling or anything like that in the arms, but what worries us the most at this point is probably a concussion,” said manager Bob Melvin, adding that Profar never lost consciousness. “But they check everything.”

Profar and Abrams both went into flat left field after a flyball hit by Tommy La Stella of the San Francisco Giants in the fifth inning. Abrams made the catch with his back to infield and his left knee caught Profar in the left jaw as Profar appeared to position himself for a jump catch.

Profar rolled onto his back, writhing in pain. He was nursed for several minutes and eventually sat up. He tried to leave the field, accompanied by coaches, but collapsed when he reached the infield.

Profar remained on the ground for a few more minutes surrounded by training staff before a medical van arrived. He was placed on a stretcher before being taken away in the wagon. Profar raised his right fist in response to the crowd’s cheers and appeared to be smiling.

“It’s awful, but he makes it easier by the fact that he’s smiling. He’s lying there smiling,” Melvin said of Profar. “We get it up, but suddenly it goes down again. Every time you put someone on a stretcher like that, it’s a horrible feeling. But when you see him trying to make everyone feel good with a smile on his face, it makes you feel a little bit better.”

Abrams stayed in the game. The Padres won 2-1 in 10 innings.