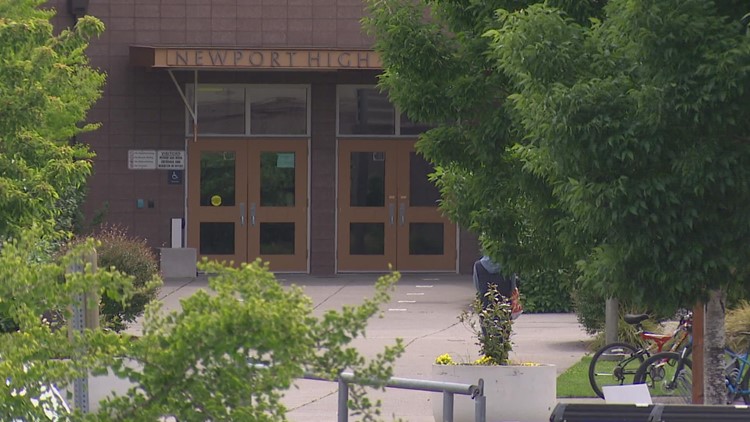 A Bellevue student says he went from a love of school to a fear of walking. He says false allegations and the harassment that followed are the reasons.

BELLEVUE, Wash. — At Newport High, a student said he will no longer be silent.

“I don’t trade school districts. I will not avoid the problem,” he said.

His family files a lawsuit against the Bellevue School District. The student is a minor and asked that we only address him by his initials CSA. With his parents by his side, he explained on Wednesday what happened in 2021 after a breakup with his girlfriend.

According to the CSA, harassment on campus followed. He brought allegations to the school over an incident in which he said his ex-girlfriend, who was also a student, smeared ketchup on his car and hit him. When confronted by administration officials, he said she made her own allegations.

He calls this claim false. A complaint filed Wednesday in King County Superior Court says multiple independent investigations by the school and police have come to the same conclusion.

“The first proved I was innocent. The second proved that I was innocent and that she was guilty of harassment and bullying,” he said.

CSA said it only escalated from there. The false allegations were printed in a school circular, posters were put up saying he hits girls, and on November 19, 2021, the students left the school, he said.

“Well over half the school was there,” he said.

“My son’s name was shouted through a megaphone over 500 other children singing in support of a false accusation,” said Ben, the student’s father, who asked that the family’s last name not be used.

According to her attorney, Yvonne Ward, the family has repeatedly asked the school district to share the results of the investigation, but she said it didn’t happen.

“The school allowed this false story to continue and created a devastating environment for my client,” Ward said.

In an email, the school district declined our request for an interview, saying they would not comment on individual student records for reasons of their privacy and protection.

The email continued, “The district takes Title IX and allegations of harassment, intimidation and bullying very seriously and has policies in place to guide and assist us in supporting our students.”

The statement continued, “This year, BSD students led the school community in constructive and productive conversations that highlight the opportunity for process improvement. Our students, educators and school leaders continue to listen to one another and work together to learn more and develop transparent processes that support, honor and empower them and their families.”

“With social media and the internet, it’s hard for him to get away from it. That will follow him,” Ward said.

“I just hope my side of the story comes out,” CSA said, “People are telling me to kill myself. People telling me they’re going to wear me out, something like that, threats on my life. Nobody should have to go through this. And the school district did nothing to protect me. So something has to change.”

'You can always come up with new ways to scare people': The 'visceral' horror of 'Callisto Protocol'