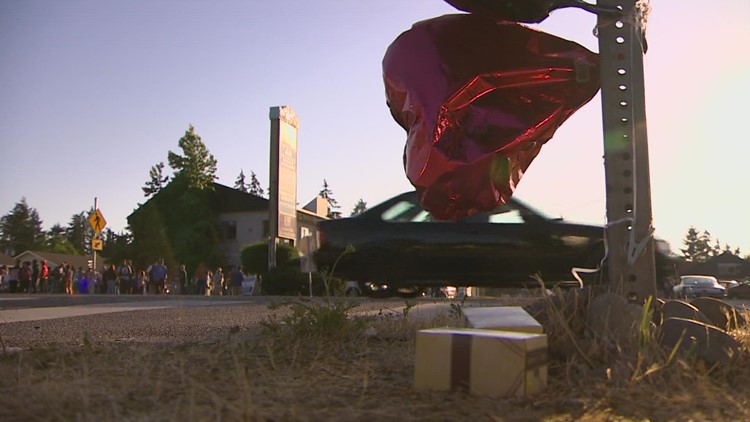 Family, friends and the community held a vigil at the crosswalk Saturday where 13-year-old Michael Weilert was struck and killed.

PARKLAND, Wash. – A Parkland mother has called for change after her 13-year-old son was hit and killed while cycling at a crosswalk on Tuesday.

Family, friends and the community held a vigil Saturday to commemorate and honor 13-year-old Michael Weilert at the crosswalk where he was hit and killed.

Michael’s mother, Amber Weilert, said Michael would do anything to make people smile.

“He had great one-liners. The boy was so funny and smart,” said Weilert.

Michael loved to ride his bike and was building a new one, but things took a tragic turn on Tuesday when he was hit by a car while crossing the intersection of Pacific Avenue and South 134th Street.

The Washington State Patrol said Michael did everything right and activated the crosswalk flasher.

Now Michael’s family is fighting for change and wants to adopt “Michael’s Law,” which would make zebra crossings flash red.

“There is a person crossing this street and you have a car. When it’s red, they know they have to stop,” Weilert said

Michael’s family said his friends also use this crosswalk.

“If we had to go through that again with one of these friends, it would be heartbreaking to think we didn’t try,” said David Weilert.

Those who knew Michael said the crossing was dangerous, including its director, who made sure people were able to get to the vigil safely.

“This shouldn’t have happened and our children deserve safe streets and safe communities. Especially when our school is closed and they are not there most of the day. We should focus on the safety of our children,” said Rosita Castellano, Principal of Keithley Middle School.

Amber said Michael has so much life to give and doesn’t want another mother to go through that.

“I just want him to pass on, even if he’s not here with us,” said Weilert.

The driver did not leave the crime scene on Tuesday. The Washington State Patrol said its investigation is ongoing and it has not yet been decided whether the driver will be charged.

Hitting the Books: COVID set off an exodus of urban artisans

Monkeypox death confirmed by Los Angeles County health officials, believed to be 1st in US