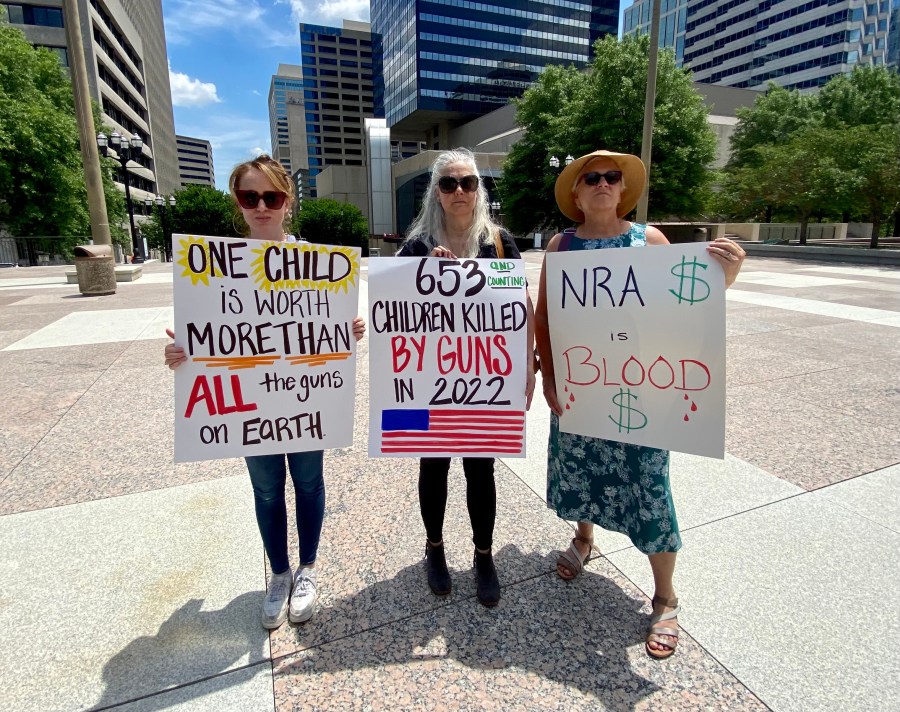 Anti-gun activists and a group of pastors gathered outside Gov. Bill Lee’s office to call a special legislative session to repeal the permitless carry law and ban assault semi-automatic weapons.

The TN law, which requires violent offenders to serve 100% of the sentence, goes into effect this summer


The group laid down stuffed animals, backpacks and flowers to commemorate those who were gunned down at Robb Elementary School and a Tops grocery store.

“Even in our own state, six teenagers were shot dead in Chattanooga just this past weekend. Enough is enough,” said Rev. Dr. Kevin Riggs.

The group asks lawmakers to consider the following five proposals for pacification:


Nashville mom Shaundelle Brooks lost her son in the 2018 mass shooting at the Antioch Waffle House and is calling on lawmakers to help protect other children in America.

“Where are the good guys with guns when our children are gunned down? We are tired. We’re angry,” Brooks said. “If we want to protect our children, we don’t want to take away their Second Amendment rights.”

Gov. Lee’s office sent News 2 a statement on Wednesday, saying firearms restrictions will not be considered but school safety remains the top priority for the administration.

The governor was not present during the protest outside his office.

“Since Gov. Lee took office, school safety has been at the center of the administration’s efforts, with efforts focused on crisis resources, confidential reporting and keeping our schools secure. In 2019, the governor established a school resource officer (SRO) scholarship program that places 213 new SROs in TN public schools. The effort also doubled the state’s annual investment in school safety funding, which many districts have used to implement building safety measures and expand violence intervention programs. Investing in school safety remains a top priority under the new TISA funding formula.

“Tennessee residents are important partners in preventing violent crime in schools. The Tennessee Department of Safety & Homeland Security has developed a free app called SafeTN, which is an anonymous reporting system for students, faculty, parents, and the public to easily and confidentially report their concerns or tips to law enforcement. Mental health resources have been augmented by the Mental Health Trust Fund and the Tennessee Mental Health Crisis Hotline, which is available 24 hours a day, 365 days a year: 855-274-7471.

“In the coming weeks, we expect significant follow-up on school safety and the use of resources from the past three years, including additional federal funding, to safety efforts. Gun restrictions will not be considered.”

Eurozone Set to Expand to Croatia Next Year