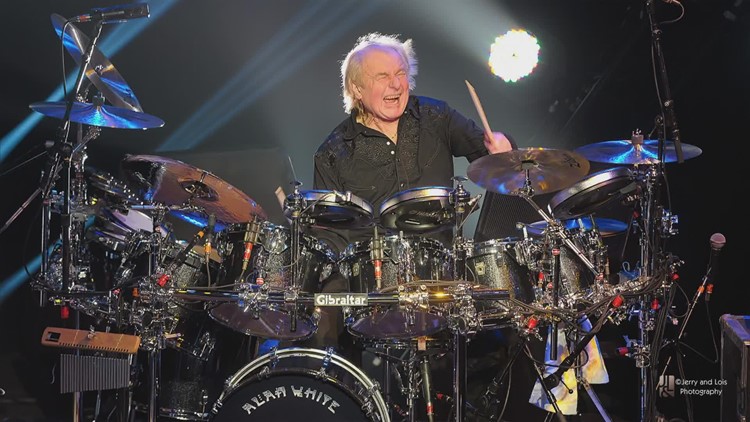 Members of YES, Pearl Jam and Heart will perform at the concert to benefit WhyHunger, a leading non-profit anti-hunger organization that White has supported throughout his life.

BELLEVUE, Wash. – A hole in the wall Bellevue Drum Shop was where a rock ‘n’ roll legend found a humble place to hang out.

“He would just come and make himself comfortable here,” said Gigi White. “It was like a second home.”

YES drummer Alan White made a roundabout journey to west Washington 31 years ago.

Jumping from England to LA, he and his wife Gigi White ended up in Bellevue to be closer to their family on the east side of Seattle and to raise their two children.

“It’s such a great lifestyle here and such a great community that nobody wanted to go back,” said Gigi White.

During those three decades, Alan White joined West Coast Drums regularly to give free lessons and camps for charity events.

“It’s a real source of pride,” said Gigi White. “Every time I drive and see a license plate, I give them a beep!”

But Alan White’s music fell silent in May when he died aged 72 after a short illness. He died 11 days after the couple celebrated their 40th anniversary.

“We were just a team and we knew how to be a team together,” said Gigi White, wiping tears from her eyes. “We’ve done better together than any of us could individually. My love for him knows no bounds.”

After the death of her husband, Gigi White’s life was forced into a different rhythm, but she found him – strong and enduring here at home.

“We didn’t expect that. It was a real adjustment,” Gigi White said, her voice trailing off. “I have a community around me now… because that’s difficult. People ask if I will stay? Of course I will stay. This is my home. Here are our friends. That’s where I’m supported now.”

Now Gigi White wants to honor her husband and the community that has given them so much with a benefit concert to help fight hunger this Sunday, October 2nd at the Paramount Theater in Seattle. Proceeds benefit WhyHunger, a leading anti-hunger non-profit that Alan White has supported throughout his life.

Members of YES, Pearl Jam, Heart and more will perform.

A member of the rock kings is celebrated in his adopted country.

Gigi White says it’s so important to keep Alan White’s legacy of giving alive because charity will always be the heartbeat of her community.

The Polestar 3 electric SUV will debut on October 12th