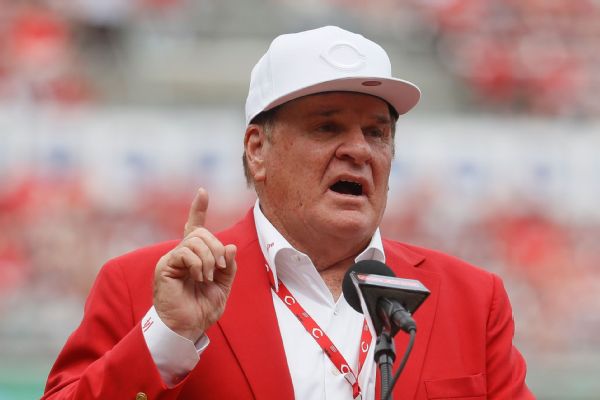 PHILADELPHIA — Pete Rose on Sunday dismissed questions about his first appearance on the field in Philadelphia since the franchise scrapped plans in 2017 to honor him because a woman claimed she had a sexual relationship with baseball’s hit king when she was a minor had.

“That was 55 years ago, baby,” Rose told a baseball writer for The Philadelphia Inquirer.

Rose, 81, declined to answer further questions in the dugout moments after an outfield team photo meant to celebrate the Phillies’ 1980 World Series championship team and other former players. The original 1980 anniversary celebration was pushed back two seasons because of the coronavirus pandemic.

Rose made his first appearance on the field in Philadelphia since receiving a lifetime ban from Major League Baseball in August 1989. He agreed to the ban after an investigation for MLB by attorney John Dowd found that Rose had placed numerous bets on the Cincinnati Reds to win from 1985 to 1987 while playing for and managing the team.

However, the Phillies planned to honor Rose in 2017 for his contributions to the 1980 World Series champions and 1983 National League pennant winners.

The woman, identified as Jane Doe in 2017, said Rose called her in 1973 when she was 14 or 15 and they began a sexual relationship in Cincinnati that lasted several years. She also claimed Rose met her for sex in locations outside of Ohio.

Rose’s attorney had said the woman’s claims were uncorroborated.

Rose admitted he had a relationship with the woman in 2017, but said it started when she was 16. He also said they never had sex outside of Ohio.

At the time, Rose was in her mid-30s, married and the father of two children.

The Phillies wanted to induct Rose into their Wall of Fame in an on-field ceremony. That ceremony was canceled and there were no further plans to celebrate Rose until this season. He was to be introduced on the field ahead of Sunday’s game alongside many former teammates from the 1980 title team.

Last month, the Phillies defended the decision to invite Rose to attend the ceremony.

“In planning the 1980 reunion, we consulted with Pete’s teammates about his admission,” the Phillies said in a statement. “Everyone wants Pete to be part of the celebrations as without him there would be no trophy in 1980. The club have also received permission from the Commissioner’s Office to invite Pete to be a member of the championship team.”

Rose has asked MLB to end his lifetime ban.

Irv Gotti: Ashanti’s “Happy” Was Conceived Right After They Had S*X . . . 'The Song Was Like a Baby'

Dodgers vs. San Francisco Giants: How to watch and stream on TV

A lapsed fan’s guide to SummerSlam 2022