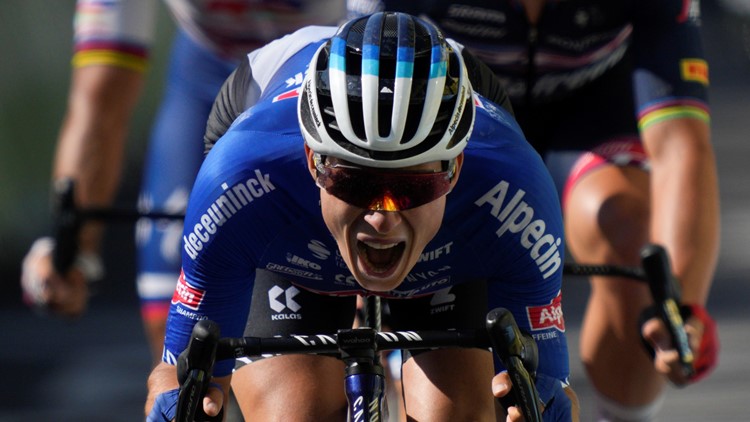 Jasper Philipsen of Belgium braved a heatwave to win stage 15 of the Tour de France in a sprint on Sunday while Jonas Vingegaard retained the leader’s yellow jersey.

CARCASSONNE, France — Jasper Philipsen of Belgium braved a heatwave to win stage 15 of the Tour de France in a sprint on Sunday while Jonas Vingegaard retained the leader’s yellow jersey.

Primož Roglič, the 2020 runner-up and a key teammate of Vingegaard, pulled out of the race ahead of Sunday’s start due to injuries he sustained earlier at this year’s edition.

Philipsen beat leaders Wout van Aert and Mads Pedersen on the line to win a Tour stage for the first time.

“That makes it super incredible. I know what it’s like to lose in the Tour de France. I’ve been close many, many times,” said Philipsen. “But that it worked today is unbelievable.”

Philipsen finished second behind Van Aert in the fourth stage of this year’s race.

“It was a tremendous search for this win and we worked really hard for it,” said Philipsen, fighting back tears. “I knew I had good legs but we just had to wait for the right opportunity.”

Benjamin Thomas had attempted to attack for a French rider’s first win of this year’s Tour but was caught on the final straight.

With peak temperatures of around 40 degrees Celsius (104 F), organizers took measures to deal with extreme heat. They relaxed rules on rider refreshments and the maximum time to complete the stage, which at 202.5 kilometers (126 miles) was the second-longest of this year’s Tour. Environmental protesters blocked the road at one point and were quickly removed.

Vingegaard’s lead remains unchanged at 2min, 22sec over 2020 and Tour winner ’21 Tadej Pogačar of Slovenia after both finished in the front group. However, the Danish rider has had to recover from a crash and has lost two of his Jumbo Visma teammates, including Roglič. That leaves Vingegaard with reduced support in the peloton as the race enters the Pyrenees after Monday’s rest day.

Roglič did not start the stage after sustaining injuries on stage five when he crashed into a hay bale that had been thrown onto the road by a motorcycle. Roglič dumped his own dislocated shoulder on the curb and has been racing in pain ever since.

“In order for my injuries to heal properly, we decided that I wouldn’t start today,” said Roglič.

Another Jumbo Visma driver, Steven Kruijswijk, was taken away in an ambulance after falling.

Two other riders, Magnus Cort and stage six winner Simon Clarke, withdrew from the race after testing positive for the coronavirus. Eight drivers have left the race so far because of the virus.