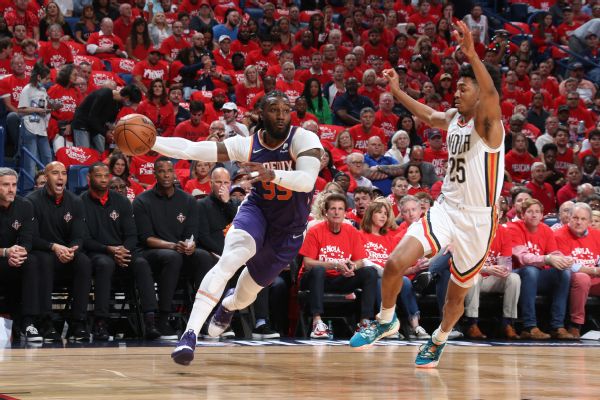 Veteran forward Jae Crowder asked not to report to the Phoenix Suns’ training camp and the team agreed while continuing to try to find a trade for him, sources told ESPN.

Crowder, 32, is nearing the final season of his contract, which will pay him $10.1million, but has faced a smaller role as the Suns are expected to extend the playing time for forward Cameron Johnson. That’s one of several factors that may have led to Crowder’s request.

The Suns announced on Sunday that Crowder will leave the team. In a tweet, Crowder wrote, “GO FOR WORK WHERE IT’S WANTED…WHERE IT’S NEEDED!”

YOU HAVE TO LOOK FOR WORK WHERE HE IS WANTED.. WHERE HE IS NEEDED.! I AM GRATEFUL FOR WHAT THE PAST 2 YEARS HAVE LEARNED ME! NOW I MUST ACCEPT ANOTHER CHALLENGE WITH CONTINUED HARDWORK & DEDICATION.! FOR THOSE OF YOU WHO LOCKED THE DOOR TO ME…. THANK YOU! 99 BACK SOON.! 🥷🏾🤫🤐

Team owner Robert Sarver announced last week that he was selling the franchise after an NBA investigation confirmed reports of racially insensitive and misogynistic comments during his tenure.

Crowder’s goal and shooting tally declined slightly last season after being a key member of the Suns’ Finals team in 2021. The defensive specialist averaged 9.4 points and 5.3 rebounds in 67 games last season.

The Suns were in trade talks surrounding Crowder over the summer but couldn’t find a deal. They had discussions with the Utah Jazz about Bojan Bogdanovic before he was traded to the Detroit Pistons last week.

Man arrested in Chico for allegedly planning a mass shooting