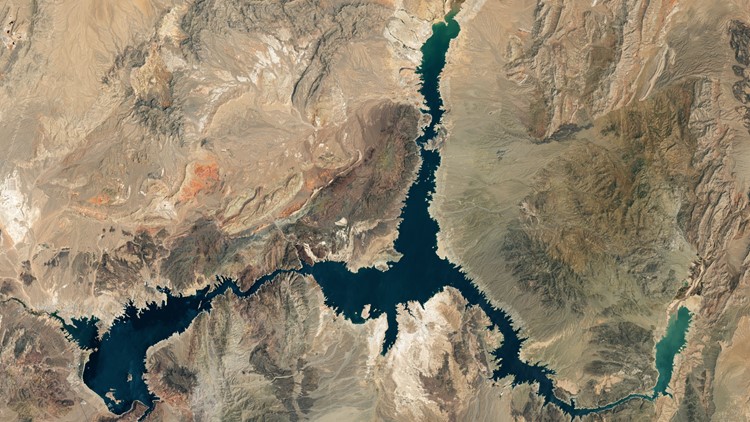 Lake Mead provides water to millions of people in seven states. But decades of drought took their toll on the reservoir.

WASHINGTON — New photos from two NASA satellites tell a dramatic story of drought in the western United States, illustrating a shocking drop in water levels at Lake Mead over the past 22 years.

The reservoir is just below the Hoover Dam on the Nevada-Arizona border, just south of Las Vegas.

The photos were taken by NASA’s Landsat 7 and Landsat 8 geographic surveillance satellites. The first was recorded on July 6, 2000. It shows a healthy pool of water near the Overton Arm of the reservoir. The second, July 3, 2022, shows a much shallower pool of water surrounded by the dried-up banks that were once submerged.

Large parts of the northern part of the lake appear to have dried up completely. The reservoir currently holds approximately 27% of its total capacity.


According to NASA, Lake Mead’s water level is currently at its lowest level since April 1937, when it was first filled.

The dried up lake has also uncovered a number of human remains that may have been dumped by the mob or by drowning victims or missing persons.

Lake Mead is the largest reservoir in the United States. It supplies millions of people in seven states with water from the Colorado River.

But the drought caused by climate change has dramatically reduced their ability to provide adequate fresh water for people in the western US under “extraordinary” drought conditions, according to NASA.

The lake level must remain above 1,000 feet in order for the dam’s hydroelectric turbines to continue to operate at normal levels.

With Midterm Primaries, The Frying Pan Candidate Is One Step Closer To Congress