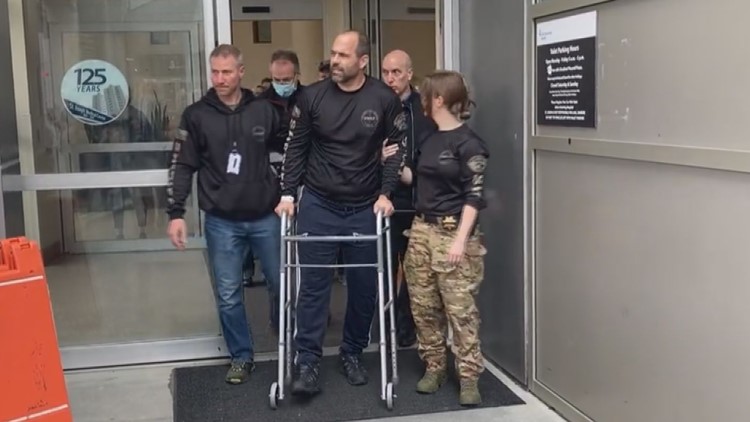 Sergeant Rich Scaniffe, 45, suffered a life-threatening gunshot wound March 15 while serving a warrant for the arrest of a suspect.

PIERCE COUNTY, Wash. — A Pierce County sergeant officially returned to duty this week, months after he was injured in a shootout during a SWAT operation near Spanaway.

Detachment members lined the street with emergency lights and greeted Scaniffe on his return.

At the time of the shooting, Scaniffe had been with the department for 21 years and on the SWAT team for 14 years. He was also the commander of the team for a year.

Scaniffe is married and has a young daughter.

Scaniffe and Calata were shot dead while assisting the South Sound Gang Task Force, which the Sheriff’s Department SWAT team had asked for help based on the suspect’s previous convictions.

Gunfire was exchanged during the operation, which took place south of Spanaway. The suspect, 40-year-old Jeremy Dayton, was shot dead.

Dayton has been labeled a “Third Strike candidate,” meaning he could potentially face life in prison. Law enforcement was serving a warrant for alleged assault with a firearm at the time of the shooting.

According to documents obtained by KING 5, Dayton had nine felonies, including multiple counts of second-degree assault. He was arrested eight times and detained three times.

Calata died the day after the shooting surrounded by his wife, parents, sister and some of his associates. Scaniffe was able to say goodbye to Calata before he died.

Calata served in the Pierce County Sheriff’s Department for six and a half years and was assigned to the Edgewood Police Department’s Patrol Division. He was married and had a 4 year old child. He was also a US Army veteran and served in the National Guard for the past seven years.

‘Me Or The Menu’: Show Made By 90 Day Fiancé Producers

In Southern Pakistan, a Sea Made of Monsoon Waters Swallows Villages

Bill will track some sexually violent offenders with GPS