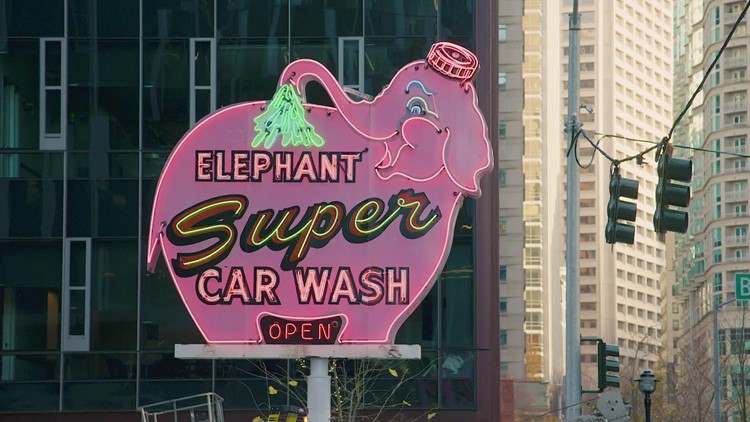 It took over a year of work to replace the wiring and install the neon lights on the sign.

SEATTLE — A popular pink attraction has returned to the Seattle skyline.

One of the pink Elephant Car Wash signs on the corner of Sixth Avenue and Battery Street is now lit in the shadow of Amazon spheres at Seventh Avenue and Blanchard.

It took over a year of work to replace the wiring and install the neon lights on the sign.

Western Neon’s creative director, Dylan Neuwirth, said: “We took something that could have been considered a sign at one time but was filled with a lot of craft and technique. It’s art!”

Honoring the original artist is the pride of Western Neon.

The timing couldn’t be better. According to Zach Goldsztejn with Amazon, the Seattle Landmarks Preservation Council unanimously voted to designate the sign as a landmark.

“We are a Seattle business and we felt it was really important to preserve this cultural and iconic part of Seattle,” says Goldsztejn.

The Elephant Car Wash location was established in 1956.

In 2020, the car wash chain announced it would close the location, citing increased crime, drug activity, homelessness, and the growing cost of doing business in Seattle.

The sign on Amazon’s premises is one of two Elephant Car Wash signs. A larger plaque was donated to Seattle’s Museum of History and Industry.

The pink Elephant Car Wash sign was designed by Beatrice Haverfield of Seattle in 1956, and she has since continued to create the image that has become part of Seattle’s history.

She also designed the neon-lit Ivar’s sign on the waterfront, the original Cinerama sign, the now demolished Chubby & Tubby, as well as Dick’s Burgers.

Clock: The history behind the pink Elephant Car Wash sign

Forth Worth jet crash: Pilot ejects from Marine Corps F-35B after failed landing at Naval Air Station Joint Reserve Base in Texas

New U.S. Base on Guam Is Aimed at Deterring China

Newsom plans to keep lights on in CA — with fossil fuels

Why Are Our Attention Spans Shortening?

Big Fed rate hike aims to slow, but not stifle, the economy