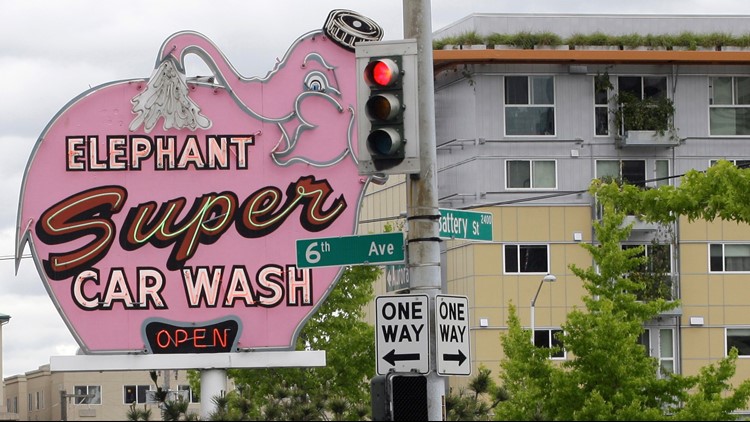 SEATTLE — A neon sign as iconic in Seattle as the Space Needle has taken its first step toward becoming a historic landmark.

The City of Seattle Historic Preservation Board voted Wednesday to approve the nomination request to consider the Pink Elephant Car Wash sign an official landmark.

The sign is from the original Pink Elephant Car Wash built near 6th and Battery in 1956. There are two signs from the spot; A larger one was given to the Museum of History and Industry in Seattle. A second, smaller one donated to Amazon is being considered for landmark status.

Beatrice Haverfield designed the signs for the car wash, as well as the neon signs for other Seattle establishments such as Ivar’s and Dick’s.

Haverfield’s daughter, Kathleen Wolff, told KING 5 she can only imagine what her mother would think about her professional work being considered a piece of history.

“Just my mother’s full story, more as a sign of getting the credit for how amazing she was for the time she was doing what she was doing,” Wolff said.

In 2020 the sign was donated to Amazon, which is monitoring the future of the sign with the help of BOLA Architektur + Planung. The sign is currently being restored by Western Neon in SoDo.

A presentation by Amazon representative and architect Susan Boyle said a potential new location for the sign, should it become a landmark, could be at 7th and Blanchard. The public could see it, according to the representatives.

Other remnants of the car wash chain still remain, such as the 4th Avenue location in SoDo. But the hope is to keep the 66-year-old original alive.

“We see this sign and think the same thing. We say hello, mom,” said Wolff.

The next public meeting on the next steps of the monument protection signs will take place on August 17th.

Still No Peace at the Justices’ Houses