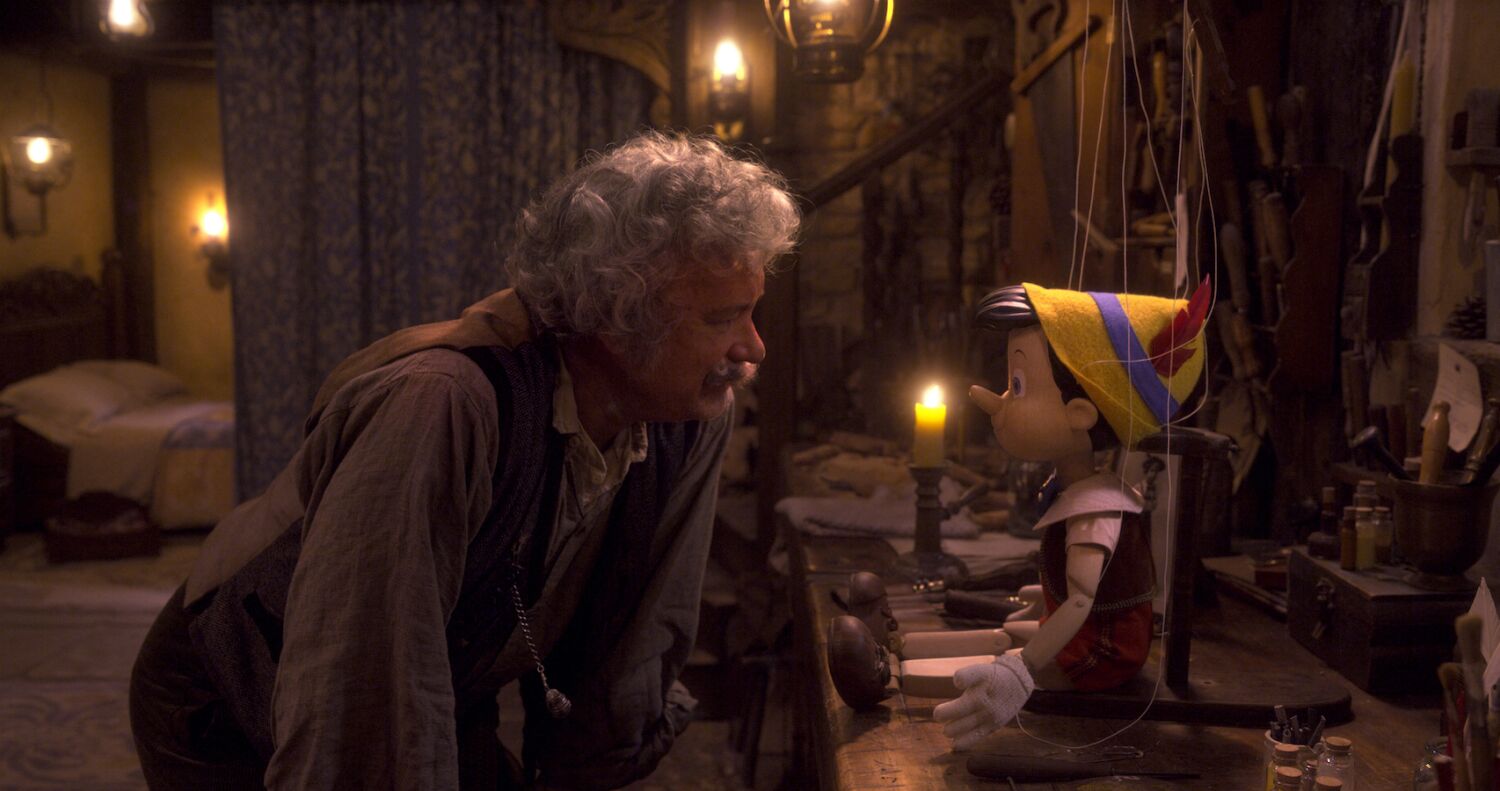 It may have started when they eschewed hand-drawn animation from their feature film productions, or perhaps when producing superhero sequels became their mainstay. But no matter where it began, the once-touted cheapening of Disney marvels hit rock bottom with the studio’s infamous pseudo-live-action remakes of its animated classics.

Walt Disney’s own 1940 interpretation of Pinocchio is often considered one of the most accomplished and innovative animated feature films ever conceived. But with Robert Zemeckis’ new hybrid incarnation – which combines live-action elements and 3D CG animation – the Oscar-winner has carved out a lackluster recreation.

The Italian story of the wooden boy who wanted to be a flesh-and-bones child begins with tiny Jiminy Cricket (voiced by Joseph Gordon-Levitt) finding refuge from the cold in Geppetto’s (Tom Hanks) home/workshop, a gifted woodcarver who has completed a large-eyed and living marionette made in the likeness of his late son.

Named after his pinewood composition, Pinocchio (voiced by Benjamin Evan Ainsworth) becomes sentient as the Blue Fairy (vocally gifted Cynthia Erivo) answers Geppetto’s heartfelt call. Authentic childhood is within reach, she explains, if he proves himself bravely and honestly. She represents Jiminy as the newborn character’s voice of reason.

Early on, during this drawn-out opening, a clever, if coy, sequence featuring cameos from a variety of other Disney characters claims the crown as the film’s most notable event.

Unlike Matteo Garrone’s recent stunning take or Guillermo del Toro’s forthcoming stop-motion reinterpretation, which take aesthetic liberties, Zemeckis doesn’t adapt Carlo Collodi’s 19th-century fable, but rather the previous Disney version of it. This adventurous pursuit involves mimicking his characters’ details, costumes, and color palettes to mimic as closely as possible what audiences are already familiar with.

But for a film that’s all about being real, locating physical elements on screen would be difficult. The entire “Pinocchio” by Zemeckis appears to have been shot on a green screen. Subpar digital visuals include over-the-top lighting in the daytime scenes and poorly rendered integration between the characters and the environment, which is particularly noticeable towards the end of the film in set scenes that take place in the water.

None of the zombified “live-action” reruns of Disney animated films have improved on the originals, but it seems that quality drops off at an alarming rate when it’s only intended for the streaming service, as is the case here.

Pinocchio’s transformation from 2-D animated design to voluminous design makes for an almost identical copy, as he remains an inanimate object capable of retaining his caricature-like features. This differs from the unconvincing digital form that organic creatures like Jiminy, Honest John, a two-legged fox; or Geppetto’s cat Figaro adopt 21st century technology.

Aside from the film’s unflattering artificial look, the screenplay (credited to Zemeckis, Chris Weitz, and Simon Farnaby) is riddled with anachronistic jokes and a few references to adults, which mostly serve as insulting attempts to modernize the story. In an incredible feat of time mismanagement, this “Pinocchio” is some 20 minutes longer than the 1940 version, yet manages to blatantly avoid a poignant and magical ending.

More stilted, or wooden if you will, than Pinocchio himself, the few human performances, including Hank’s, overflow with an unnatural theatricality that creates a tonal dissonance with the more subtle play of their digital counterparts.

Even the promising addition of Fabiana (Kyanne Lamaya), a compassionate puppeteer, and her ballerina puppet Sofia to Pinocchio’s journey eventually proves inconsequential.

There’s a clear line between Zemeckis’ longstanding affinity for animation and the use of technological advances in storytelling. This boldness has led to glorious totems of American cinema like Who Framed Roger Rabbit and Back to the Future, but also misfires in cinematic experiments like Beowulf, The Polar Express or the abysmal Welcome to Marwen. .” Unfortunately, this effort joins the latter group.

Zemeckis’ Pinocchio makes one wish a star that Disney would stop watering down the legacy of its beloved cartoons with these soulless fakes. But with several more in the pipeline, it seems unlikely that the company will be heeding the Blue Fairy’s warning to avoid untruths and follow your conscience any time soon.

Rated: PG, for dangerous/scary moments, rude material and some language

Democrats Were the First Election Deniers