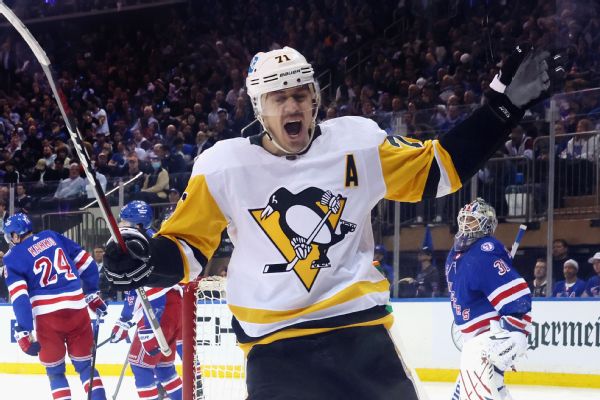 Evgeni Malkin agreed to a four-year contract extension with the Pittsburgh Penguins on the eve of NHL Free Agency, ending a tumultuous week between the Star Center and the team.

“Evgeni is a generational talent who will be remembered as one of the greatest players in NHL history,” Penguins general manager Ron Hextall said in a statement Tuesday night. “His hockey resume and individual accomplishments speak volumes for him as a player, and we’re thrilled he’s continuing his remarkable legacy in Pittsburgh.”

Malkin has spent all 16 years of his career with the Penguins. Along with center Sidney Crosby and defenseman Kris Letang, he was a core player in helping Pittsburgh win the Stanley Cup three times. Malkin won the 2011-12 Hart Trophy as NHL MVP and the 2009 Conn Smythe Trophy as playoff MVP. He has 1,146 points in 981 games with Pittsburgh.

Malkin had 20 goals and 22 assists in 41 games for the Penguins last season and then six points in seven playoff games.

Hextall hinted at last week’s NHL draft in Montreal that the Penguins wanted to bring back Malkin, who was a full free agent, and that they were “chopping off” on a new contract.

But while the Penguins signed veteran free agent Letang to a new six-year deal last week, they were unable to find common ground for a new deal with Malkin. Their standoff became increasingly public. There were multiple reports of Malkin’s frustration with the team during negotiations, while the Penguins pushed back reports that they were refusing to extend Malkin’s contract offer for a fourth year.

An NHL source told ESPN Monday that Malkin was en route to the unrestricted free agent market, which opens at 12 p.m. ET on Wednesday. Speculation abounded in the NHL as to where the star might end up – including some who believed he could jump to rival Washington Capitals to join his friend Alex Ovechkin. But while Penguins team president Brian Burke confirmed that Malkin is on the way to the market, he told the Pittsburgh Tribune-Review that there was still a chance Pittsburgh could bring Star Center back to a new deal .

“The window is still open. But the timing is a problem,” Burke said. “Once free agency opens, we must commit to improving our hockey club. So the timing may not work. But certainly there is no reaction from our side that says: ‘Oh, we don’t want Evgeni back.’ Or: “That’s terrible. What is he thinking?” None of them.”

Malkin was originally drafted by Pittsburgh in the first round (second overall) of the 2004 NHL draft. With this contract it is now possible for him to end his career with them.