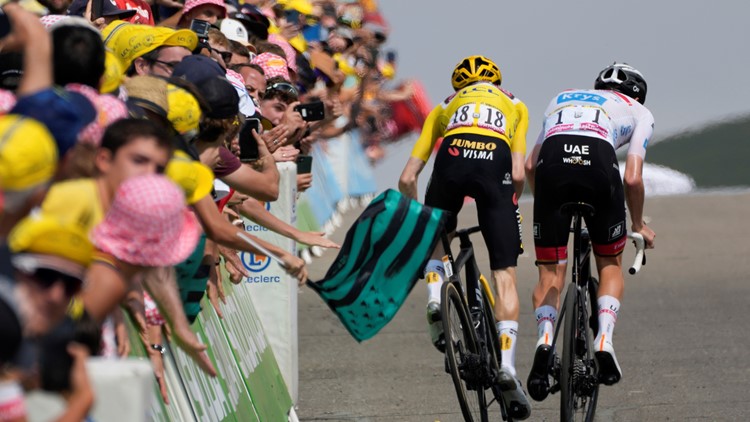 Tadej Pogacar clinched a stage win as he sprinted away from Jonas Vingegaard in the tough final climb of the Pyrenees but was unable to make up any significant time.

PEYRAGUDES, France (AP) — Tadej Pogacar clinched a third stage win when he sprinted away from Jonas Vingegaard on Wednesday’s punishing final climb of a grueling hike in the Pyrenees, but failed to snag the Tour de France leader any significant time.

As so often in this year’s race, the two were in a class of their own and had to fight each other on the brutal last kilometer to the Peyragudes Airstrip.

When Pogacar’s teammate Brandon McNulty – who paced his leader through punishing climbs with an impressive effort of sheer abandon throughout the day – was dropped, it was time for a final high-altitude showdown.

In the steep ramp leading to the finish, Pogacar accelerated to the left at about 300 meters. Vingegaard countered with ease, but the two-time defending champion had the last word with a finishing kick that helped him progress with Vingegaard at the wheel and cross first.

“I’m optimistic that I can still win the tour,” said the 23-year-old Slovenian. “Tomorrow is a tougher stage so we can try again.”

Since his bad day in the Alps when he relinquished the yellow jersey to Vingegaard, Pogacar has been in attack but hasn’t managed to make up the time he lost to his rivals.

The UAE-Emirates team also had to cope with many departures in its team. On Wednesday, Rafal Majka retired from the race shortly before the start of the stage due to a hamstring injury. Pogacar had already seen their support unit reduced to four riders following the earlier withdrawals of George Bennett, Vegard Stake Laengen and Marc Soler.

“The way the team rode today with just four riders to take the stage win is incredible,” said Pogacar. “We can all be proud of what we have achieved. Without Rafal, George, Vegard and Soler we couldn’t keep trying. We’ll see if there’s another chance tomorrow.”

Pogacar will have one last chance to unnerve the Jumbo Visma team leader in the mountains during Thursday’s grueling final Pyrenees stage between Lourdes and Hautacam.

His last chance to turn the race upside down after that will be Saturday’s time trial, a discipline where he has the upper hand on paper.

Pogacar’s hat-trick of stage wins this year brought his career tally to nine.

Vingegaard finished second behind Pogacar last year. The Danish rider has been impressive since the start in Copenhagen and again showed no signs of weakness during Wednesday’s tough ride that featured four big climbs.

With the stage winner’s time bonus, Pogacar moved four seconds closer to Vingegaard, who now has an overall advantage of 2 minutes and 18 seconds in the standings. Geraint Thomas, the 2018 Tour champion, was dropped on the penultimate climb and was third overall, 4:56 behind.