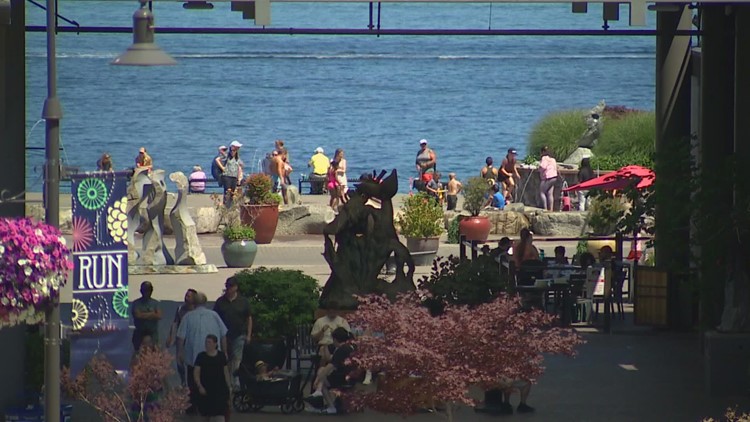 The Point Ruston Owners Association said the policy stemmed from an exclusivity clause about selling Mexican groceries in a brick-and-mortar vendor’s contract.

RUSTON, Wash. — The Point Ruston Owners Association has come under fire for allegedly barring vendors from attending a farmers’ market because of the type of food they serve.

The controversy began when the Tacoma Farmers Market on Saturday announced a directive from the Point Ruston Owners Association to stop selling what they described as “Mexican food” at their Sunday market. As a result, two vendors selling Mexican food were removed.

The announcement comes despite the fact that the Tacoma Farmers Market is an entirely separate entity from the Point Ruston Owners Association.

It caused an uproar on social media, with many declaring they will not visit until the issue is resolved.

Point Ruston issued a statement saying the organization has an exclusivity clause with its brick-and-mortar vendors’ contracts regarding Mexican cuisine.

When Leagues of United Latin American Citizens PNW’s Amelia Escobedo got wind of the announcement, the message was clear.

“To me that means ‘No Mexicans allowed,'” she said. “That means no browns are allowed. That means you are not welcome here.”

None of the restaurants on Point Ruston’s website exclusively serve this type of cuisine.

In fact, the only restaurant that does this is Taco Street at Waterfront Market in Ruston, which is its own entity.

“It’s completely separate from Point Ruston,” said Paul Kunitsa, general manager of Ruston’s Waterfront Market. “The Farmers Market is in this Breezeway. So it’s obviously quite a long way from us. We don’t even have an access point to get there right now.”

Kunitsa said news of the announcement surprised him and hopes his suppliers are unaffected by the controversy.

Civil rights attorney Molly Matter said enforcing a clause like this is nearly impossible because it amounts to discrimination based on race and national origin, which is illegal.

“You can’t say that I only serve white people or that I don’t serve that particular ethnicity. We’re talking about that, it’s totally illegal,” Matter said. “I’m not a contract lawyer, but I can’t imagine that this will stand up in court. I can’t imagine a judge looking at this and not seeing a pretext for racial discrimination.”

Now Escobedo is wondering how far this could go and is urging color suppliers to review their papers.

“We have to deal with what they write in the memos, in the various contracts, so that we know what’s in there, the choice of words, that’s racist,” Escobedo said. “If we don’t do this, nobody will do it for you. If someone doesn’t like the color of your skin or your looks, they won’t do it for you. We have to do that.”

The Point Ruston Owner’s Association did not respond to requests for comment Monday.