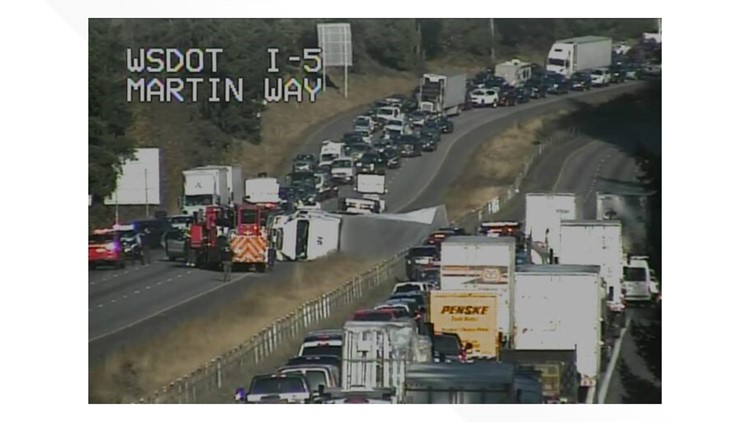 Police shot the man dead after investigators said he attacked them with a knife.

MASON COUNTY, Wash. – A man hijacked a pickup truck and then rolled it in the median of Interstate 5, attacking officers with a knife before being shot dead by police, the Sheriff’s Office Mason County said in a press release Tuesday.

The Washington State Patrol first received a call from a man stuck in traffic on I-5 Friday afternoon. After trying to open several car doors, investigators said the man had access to a pickup truck and assaulted the driver.

Immediately after getting behind the wheel, the man crashed into several other vehicles before flipping the pickup truck into the divider near Olympia. WSP closed both sides of I-5 while trying to get the man out of the hit truck.

WSP was unable to pierce the pickup’s windshield with less-lethal bullets and ended up having to use a ram at the end of the SWAT vehicle to remove it.

The man still refused to get out of the vehicle, and tear gas shells and flash explosions were deployed.

When he finally got out of the pickup truck, police said the man was armed with a knife and attacked an officer. The man was shot and died at the scene.

After the truck rolled off before 2 p.m., I-5 did not fully reopen on either side until after 6 a.m. Saturday.

Canada is back in World Cup, and has big plans for future