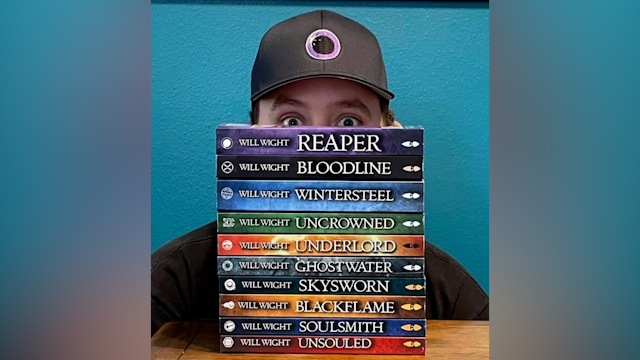 POLK COUNTY, Fla. (WFLA) – A resident of Polk County is topping bestseller lists and taking over the internet with his fantasy novels.

Will Wight graduated from the University of Central Florida. He has many novels ranging from “Traveler’s Gate,” “Elder Empire,” and “Cradle.” Many of the books in the series have made the New York Times Best Sellers list in addition to topping the Kindle store.


Wight rose to prominence over the years after self-publishing his first novel on the Amazon Kindle store in 2013.

His passion for creativity is lifelong.

“As far as I can remember before, I was probably four or five years old. We played a game in our family where we would give each other three things, we would pick three things at random… a teddy bear, an airplane and an alligator,” explains Wight. “And then we will have to turn them into a story. So we started doing that as little kids, so they were nonsense stories.”

He said his father always told stories about his own life, but his love of fantasy content started early.

“For me, a story only improves when there are supernatural elements in it,” he said. “It just got better. It’s the same story, but better now. So I’ve always been very focused on the fantasy side.”

After earning his master’s degree at UCF, Wight’s family pushed him to write that first book. Previously, he wrote only short stories.

“So my family said, ‘look, you need to put your money where your mouth is and you need to finish a novel.’ So I said, “Okay, I’ll do it this time,” Wight said.

At the time, the Kindle Select Direct Publishing Program was starting to gain popularity. Wight thought that instead of trying to sell his book to publishers right away, he would put the book on Amazon to see if he would get a response.

“I’m going to try putting it on Amazon and see if I can build a following. Let’s see if people enjoy what I’ve written. My plan there is to try and get some fan feedback, maybe make some money so I don’t starve,” said Wight. “I was really trying to make $500 in one summer so I could hopefully get a teaching position in the fall.”

Then came its sequel, and two other book collections. Wight has now written 20 books in total, by the time of its next release.

Recently, he and his team created Kickstarter to fund the release of books in physical stores or to be ordered in hardcover or paperback. The fundraising goal was set at $10,000.

It goes beyond that.


“Our minds were blown. So we set a goal of $10,000 and that’s the minimum we need to complete the project [to do] a printout of the book. So we expect we’ll get there. We think that’s a reasonable goal,” said Wight.

The fundraiser went live, and by the time Wight knew it had been posted, it had raised $50,000.

“The whole experience was really crazy, but it was crazier than anything I expected,” he said.

Wight said the best thing about his experience was the community of fans who stood behind his books and watched it grow. There are many forums dedicated to his books, where he says people don’t stop discussing them.

Wight said it’s gratifying to see people enjoy his books, just as he gets from his own favorite books.

He can’t say much about what’s in the near future, but it’s going to be an “exciting summer”.

You can update him on his website and blog.