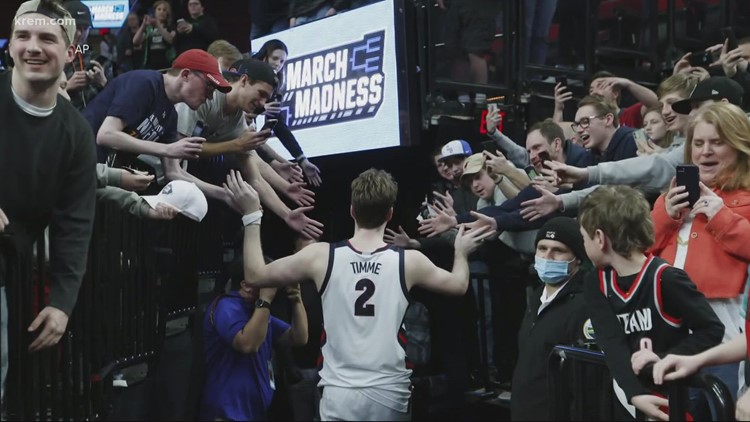 This might be the largest crowd of talented Mark Few ever amassed in Spokane. We’re trying to figure out how that might play out on the pitch.

SPOKANE, Wash. — Now that the dust has settled on Gonzaga’s program, it’s time to look to the future. Today I’m looking at who I think will start for Gonzaga next season and how I think the minutes will be split.

We’ll start with the premise that we know Rasir Bolton, Julian Strawther and Drew Timme start. That leaves two points.

Go big means they start trading Efton Reid on the 5 and trading Malachi Smith on the spot.

Go small means they start Drew at 5 and Nolan Hickman starts at the top.

That means Nolan Hickman on the 1, Rasir Bolton on the 2, Malachi Smith on the 3, Julian Strawther on the 4 and Drew Timme on the 5.

This looks a lot like Gonzaga’s starting five, which Corey Kispert started at 4 when they did the national championship game a few years ago.

Needless to say, they thrived when they got small.

I want to be clear about one thing when I’m talking about minutes before we start: I’m talking about the average minutes played in big games. Not the games being played against the world’s Pacific and Central Michigans.

Let’s start with my putative appetizers. In Gonzaga’s 15 games I watched against high-profile opponents last season, Drew Timme, Julian Strawther and Rasir Bolton averaged about 30 minutes per game. I don’t see any change so we’ll stick with it.

Remember that each competition lasts 200 minutes, so now only 110 minutes are left.

That leaves us with regard to starters Nolan Hickman and Malachi Smith. I don’t see Hickman playing the Iron Man minutes that Nembhard had to play last year. Basically, by the end of the year, Andrew was playing the entire competition. I’ll go 25 for Nolan and 25 for Malachi, who I believe will support Hickman at this point.

We only have 60 minutes left.

There are many options here and we only have 60 minutes to spread out.

Let’s start with Anton Watson, another player I don’t think will lose his minutes. He’s averaged 20 minutes in big games and I think that’s going to last.

So we’ve only got 40 minutes left and we’ve got three players left to work in Hunter Sallis, Dominick Harris and Efton Reid. Traditionally Few works with three bigs in the rotation, but Reid gives the Zags a frame of 6’11, 238lb that Strawther, Timme and Watson just don’t have. Because of the different looks that Reid can bring, I see him getting 15 minutes a game.

That leaves Hunter and Dominick with 25 minutes left. Last season, Hunter spent an average of nine minutes per big game. I see that going up to 15 leaving Dominick at 10.

Now Mark Few has only played nine players in double digits in the 2018-2019 season, but a key caveat to remember is that Killian Tillie missed more than half of Gonzaga’s games injured and Geno Crandall in this year also missed eleven games due to injuries.

Few have definitely had quite the balancing act this season, and I’m not sure he’s ever had a team with so many highly rated players all vying for game time.

How to stop weed stigma for Asian Americans? Translate the lingo

What’s next for the Lakers and injured Russell Westbrook

Which NFL team would you most want to quarterback in 2022? | Locked On NFL