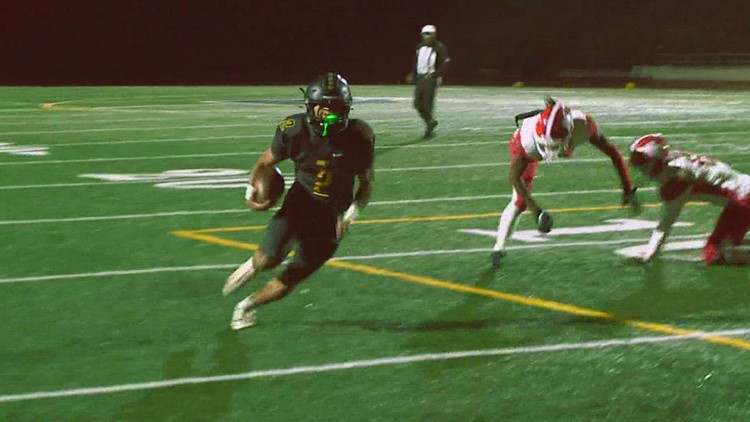 TACOMA, Wash. — The Lincoln Abes football team won a PCL conference title for the second straight season this season, and they also advanced to the state tournament.

Lincoln High School senior Gabarri Johnson is the top-rated quarterback in the state, and with good reason.

Over the past three years, the 4-star quarterback has passed and rushed for more than 100 touchdowns and nearly 10,000 total yards.

He has a golden arm and fast feet, but Johnson says his mindset was his driving force.

“What makes him good is his throwing ability and his IQ. He’s very smart like he’s one of the smartest people. Every time I come on offense after a long defensive run, I ask him what the defense is doing, what’s going on. and he’s always telling me what hole and what gap to take, how to cut and I just listen to him,” said teammate John John Nelson.

Johnson has played with many of his teammates since the 6th grade, but his parents got him into football long before that.

“My parents started me early. I don’t know how they did it, but they got me in a year early. So I started playing in kindergarten and just fell in love with it. I actually played running back and so I love just getting the ball and running through people and just getting long touchdowns,” Johnson says.

From his pee wee days with the Tacoma Riders to the Lincoln Abes, Johnson has always led by example.

He hasn’t missed an off-season practice this year, and during the pandemic, Johnson and other team leaders volunteered and rallied the team to help with the Tacoma Rescue Mission.

“Yes, leadership is definitely a big thing. You have to be someone that the team wants to follow and believe in and that’s something I’ve particularly learned here. Not only being the most athletic and knowing how to score, but knowing how to talk to my guys and knowing how to lift people up when they’re down,” Johnson said.

He had offers to play for UW, WSU, Oregon State and Arizona State but decided to go to the Midwest and play for the Missouri Tigers.

“When I went there, I fell in love with Columbia of Missouri. An amazing city, the players on the team. They were all just amazing to me and I loved every single coach while I was there,” Johnson said.

But before he goes to the SEC, he wants to represent the 253.

“I’ve lived five minutes from Lincoln my whole life, so I had to come here, I didn’t want to go to the East Side or the lakes or anywhere. I just wanted to play for the city and do something big for Tacoma,” Johnson said.

Johnson and the Lincoln Abes will take on the Monroe Bearcats in the first round of the state playoffs at the Lincoln Bowl on Saturday.

Union effort by strippers at a North Hollywood club stalls

What would you do if you won the $1.9 billion Powerball jackpot?