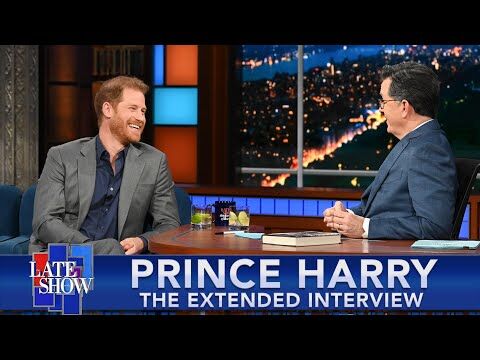 Fans braved the cold temperatures in New York City this week to be in the audience for a live taping of Prince Harry’s interview with Stephen Colbert.

But when they entered the Ed Sullivan Theater, the estranged Duke of Sussex was nowhere to be found.

Colbert told the audience that the show had taped the interview with Prince Harry a day earlier and apologized for the surprise for security reasons, the Daily Mail reported.

“Are you serious,” a viewer is said to have called out during the apology. Some had traveled across the state to take part in the taping.

“Late show” recordings, which are typically shot earlier in the day they air, last about two hours and include a warm-up routine with the host. To add insult to injury, viewers were given an abridged hour-long shoot on Tuesday, the Daily Mail said.

Harry’s Late Show performance, which aired Tuesday night, is the latest stop on his tour to promote his new memoir, Spare, which gives readers a glimpse into the drama of the British royal family. The book was also published on Tuesday.

During Harry’s nearly 40-minute sit-down with Colbert in front of what appeared to be a separate audience, the prince dropped several exciting moments, including his admission that he watches (and “fact-checks”) the Netflix series The Crown.”

Harry also addressed criticism of part of his book in which he discusses the killing of 25 Taliban fighters in Afghanistan while fighting for the British Army. The claim had been criticized by both the Taliban and British military veterans.

In the interview, Harry refuted reports that he was “bragging” about the number of people he’s killed, calling this allegation “the most dangerous lie” that put him and his loved ones in danger.

Reminding viewers that Harry’s actions in the fight had been previously reported, Colbert pulled out a 2013 Reuters report that quoted the prince as saying, “Yes, we shoot if we must, take a life, to save a life.”

Harry went on to explain why the detail made the book and said he hopes to address veterans’ shame at their violent actions in combat and reduce the number of suicides.

“I chose to share it because after almost two decades of working with veterans around the world, I think the most important thing is to be honest and give others space to share their experiences without any shame, and.” my whole goal and attempt to share this detail is to reduce the number of suicides,” said Harry, to thunderous applause from the crowd.

Prominent Pastor Declares Beyonce ‘She Sold Her Soul’ … Claims That Bey Is ‘GOING TO HELL’!!

What Does Luthen’s Transformation Say About His Identity