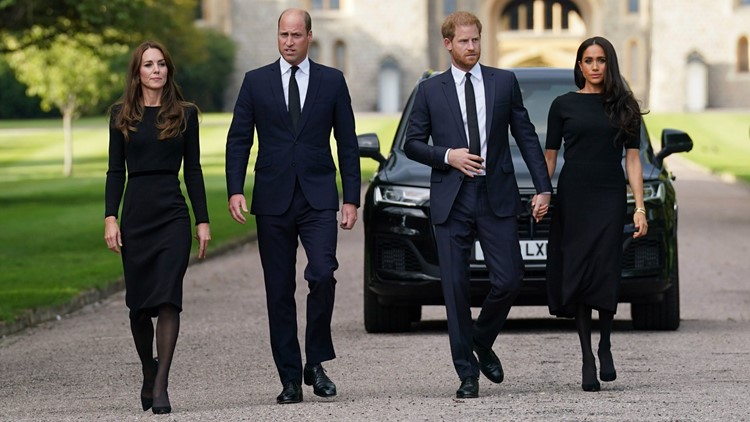 William and Kate, both 40 and parents of three young children, immediately assumed a much more central role as the new face of the monarchy.

LONDON, UK – Prince William and his wife Kate made a surprise joint appearance with Prince Harry and his wife Meghan on Saturday, giving a warm welcome to a large crowd who had gathered outside Windsor Castle to pay tribute to their long-reigning monarch, Queen Elizabeth II. to commemorate.

Their “walkabout,” the first time the brothers have appeared amicably in public together since March 2020, comes at a time when the younger generation of Britain’s royal family is having to step up their responsibilities significantly.

William, long second in line to the throne, is now heir apparent after his father, King Charles III, became Britain’s new monarch following the death of his mother. That means William and Kate, both 40 and parents of three young children, immediately assume a much more central role as the new face of the monarchy.

William and Harry have had chilly terms since Harry quit as senior royal two years ago and moved to the United States. Their show of unity on Saturday was reportedly initiated by William, giving some observers hope that Harry, 37, could return to fighting and support his older brother in sharing the heavy workload that now rests on William’s shoulders.

“Certainly, as the new Princes and Princesses of Wales, William and Catherine will receive even more media attention if that’s possible,” said Joe Little, editor-in-chief of Majesty magazine. “Up until Thursday there was a buffer between him and the throne. This buffer has now been removed.”

It’s a stark contrast to the situation two weeks ago, when William and Kate announced they were moving with their family from central London to a more rural base in Windsor. Observers thought they were seeking more privacy and a more “normal” upbringing for their children, who have just started a new year together at a private school.

Long before he took the throne, Charles indicated he wanted a “leaner” monarchy, with a narrower core of full-time royals and lower spending.

That was before Harry’s move – and before the princes’ uncle Prince Andrew was effectively banned from public life following scandals surrounding sexual misconduct.

Not many other recognizable “working royals” – members of the royal family who officially represent the monarch – remained to share the hundreds of official engagements and numerous foreign visits made each year.

The group includes Charles and his wife Camilla, now the Queen Consort; William and Kate; the Queen’s only daughter, Princess Anne; and the Queen’s youngest child, Prince Edward, and his wife Sophie. Also working royals, but much less well known, are the Queen’s first cousin Prince Richard and his wife Birgitte.

Charles William officially bestowed his own title, the Prince of Wales, in his first address to the nation, which aired on Friday. Kate is now the Princess of Wales and the first person to hold that title since William’s late mother, Princess Diana.

William and Kate also inherit the other honorary titles of Charles and Camilla, Duke and Duchess of Cornwall. That means managing and receiving revenue from the Duchy of Cornwall, an estate that includes land across the UK and is reportedly worth £1billion.

“With Catherine by his side, I know our new Prince and Princess of Wales will continue to inspire and guide our national conversations and help bring the marginalized to the fore where vital aid can be provided,” Charles said on Friday.

In his speech, Charles said he knew he couldn’t devote as much time and energy to things he cares about most, like the environment and climate change.

William will likely spend more time campaigning on these issues now. He has already made his mark by founding the Earthshot Prize, an ambitious ‘legacy project’ that is expected to hand out millions of pounds in grants to environmental initiatives over the next 10 years.

“It will be some time before the reality of life without a grandma feels truly real,” William wrote in a statement on Saturday. “I will honor her memory by supporting my father the king in any way I can.”

Charles also spoke briefly about Harry in his address to the nation, expressing his “love for Harry and Meghan as they continue to build their lives abroad.”

Harry and Meghan, the Duchess of Sussex, moved away from Britain to seek financial independence and freedom from the tight scrutiny of the British media.

The couple is now based in California with their two young children. Both Harry and Meghan have repeatedly expressed their dissatisfaction with the royals since leaving.

Those tensions were put aside on Saturday when the two princes and their wives arrived in the same car to greet people squeezing into roadblocks outside the gates of Windsor Castle. Each royal stopped to speak to children and adults, and accepted flowers and condolences from an excited crowd.

“It was so beautiful to look at. I was so emotional and I felt like the Queen would have loved it,” said Banita Ranow, 28. Her mother, Baljinder, said the visit was “fabulous.”

“I just hope they stay that way in the future and that the brothers get together,” she said.

Family describes being terrorized by suspect in Merced killings