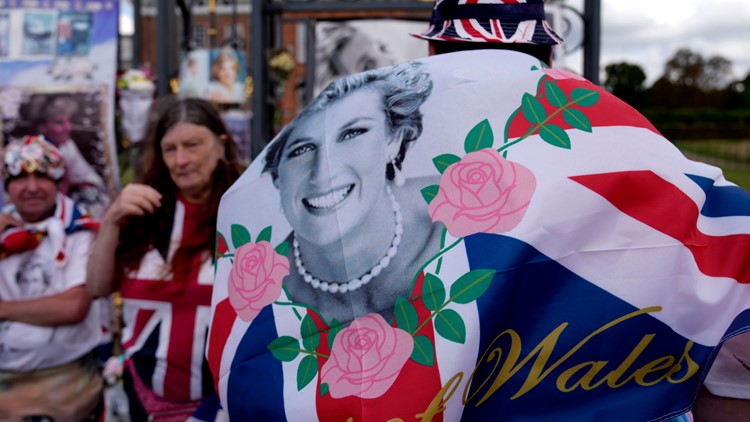 The tributes, left outside Kensington Palace on Wednesday, were a small reminder of the mountains of flowers that had piled up there in the days following Diana’s death.

LONDON, UK – Fans of the late Princess Diana laid their tributes outside the gates of her home in Kensington Palace on Wednesday to mark the 25th anniversary of her death in a car crash in Paris.

An arrangement of white chrysanthemums that read “Princess Diana” was among dozens of photos and messages left by admirers, some of whom said make a yearly pilgrimage to the site to remember the tragedy.

“We just come over here, do the memorial service and, you know, we just talk about things that she used to do, you know, to … let people know we’ll never forget the princess, we’ll never forget.” what she has done,” said Julie Cain, 59, who had traveled 300 miles (480 kilometers) from Newcastle in northern England. “We just want her legacy to last as long as possible.”

Diana died on August 31, 1997 at the age of 36, stunning people around the world who felt they knew the princess after seeing her triumphs and struggles on TV screens and newspaper front pages for 17 years. The tributes, left outside Kensington Palace on Wednesday, were a small reminder of the mountains of flowers that had piled up there in the days following Diana’s death.

Diana was the center of media attention from the moment she was engaged to Prince Charles until the night she died. Her fairytale marriage, her ugly divorce, and her struggles to start a new life made headlines.

The public watched as she evolved from a shy teenager into an international style icon who befriended AIDS patients, charmed Nelson Mandela and walked through a minefield to promote the landmine elimination initiative. Along the way, she showed the royal family, particularly her sons William and Harry, how to connect and be relevant in the 21st century.

On Wednesday morning, Cain and her friend Maria Scott, 51, paid their respects to Diana as dawn broke over the palace, as it does every year.

“There was just something about this girl that really stood out. And of course I saw the fairytale princess’s wedding,” Scott said. “And, you know, she was like a part of your life because you watched that on TV every day. She was in newspapers, magazines. She was everywhere. And you felt like she was part of your life.”

World Series bats, including Bryce Harper’s, made by King of Prussia company