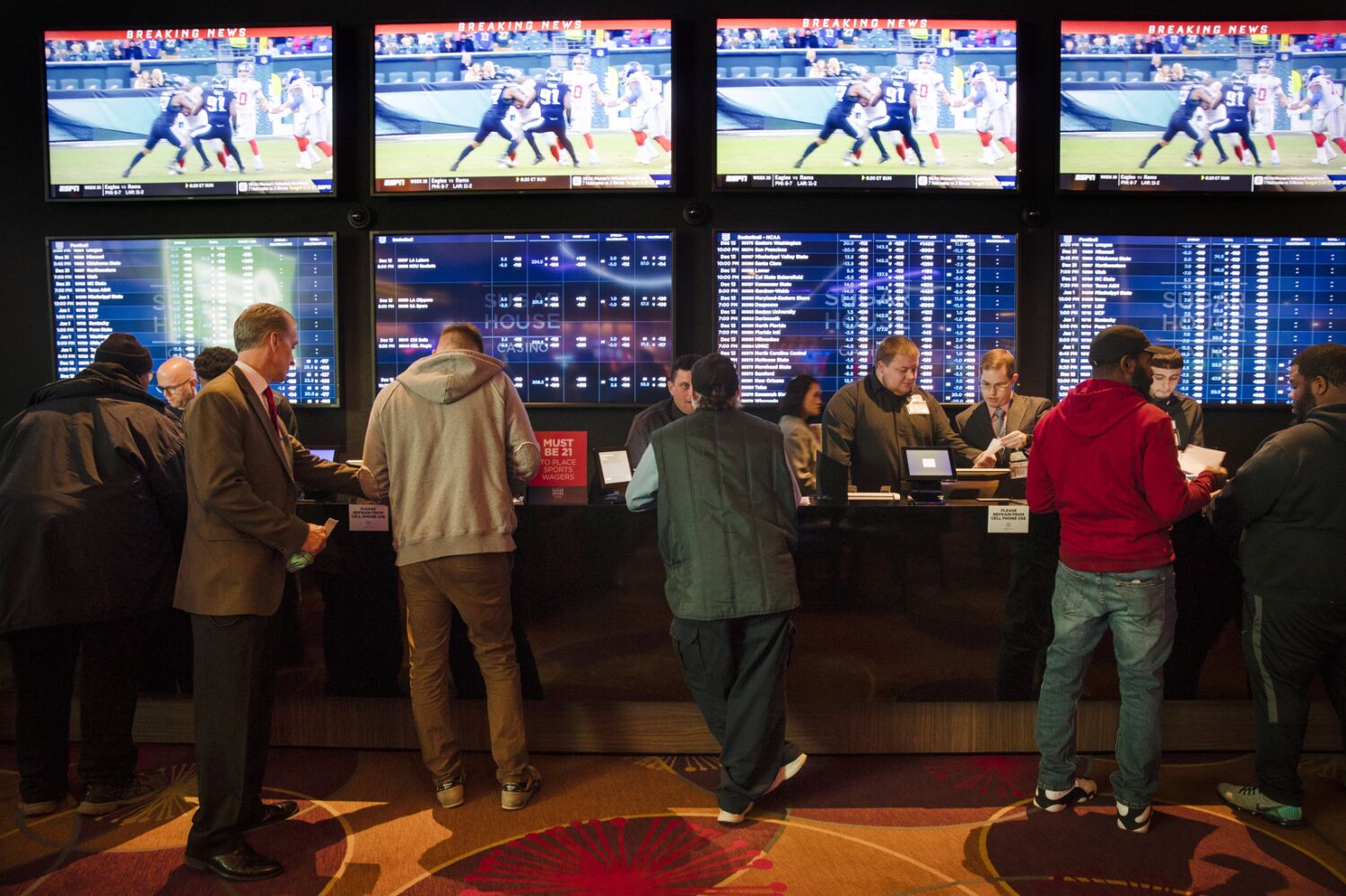 If both sides thought proposal 26 or 27 could win, they placed a bad bet.

A new poll by the UC Berkeley Institute of Governmental Studies, co-sponsored by The Times, shows little chance voters will approve either measure in November.

Likely voters who reported seeing many ads about the proposals were more likely to oppose the measures than those who had not seen ads.

“I think it’s the negative ads that kind of turned voters off,” said Mark DiCamillo, director of the Berkeley IGS poll. “People who haven’t seen the ads are roughly evenly distributed, but people who have seen a lot of ads are against it. So the ads don’t help.”

Proposition 26 would allow in-person sports betting at tribal casinos and horse racing tracks. According to the Berkeley poll of 6,939 likely voters in California, it received only 31% support from likely voters, compared with 42% who were against.

Proposal 27, which would enable online sports betting, performed even worse – 27% of likely voters were in favor and 53% against.

Proponents of the measures have inundated voters with ads, blowing away previous state campaign spending records, but they have faced an uphill battle from the start. A Berkeley IGS poll conducted in February showed that Californians are open to the idea of ​​legal sports betting, but the existence of two competing initiatives often makes it difficult for either one to get through, DiCamillo said.

Proposition 27 is funded by gaming companies including sports gaming companies DraftKings and FanDuel. The companies, which control a large chunk of the online sports betting market in the US, would have to work with a California tribe and raise $100 million to get a license in the state. Tribes could also offer their own sports betting platforms for a $10 million entry fee.

Tribes and gambling companies with sports betting licenses would pay 10% of their sports betting revenue to the state each month after deducting some expenses and losses. The initiative would use the proceeds to fund homelessness and gambling addiction programs, with a smaller cut for tribes not involved in online sports betting, according to the Legislative Analyst’s Office.

Leaders from four of California’s most successful Indian tribes with gambling interests are the original proponents of Proposition 26, the personal sports betting measure. It would impose a 10% tax on sports betting to fund gambling treatment and enforcement programs.

A coalition of more than 30 tribes supports Proposition 26 with significant funding from the Agua Caliente Band of Cahuilla Indians of Palm Springs, the Barona Band of Mission Indians of Lakeside, and the Yocha Dehe Wintun Nation of rural Yolo County.

Only three tribes support Proposition 27, while 51 tribes oppose the measure. That didn’t stop online sportsbooks from posting spots suggesting the tribes were backing the measure. Opponents countered with their own ads, creating a bewildering array of claims for voters to sort through.

Thad Kousser, a political science professor at UC San Diego, said voters had largely supported efforts to allow tribes to benefit economically from legalized gambling, which he described as “the social contract for gambling in California.”

“DraftKings and FanDuel don’t have that,” he said. “They are trying to get out of a political hole.”

When faced with an onslaught of ads, voters often tune out the message and become skeptical of the source.

“They’re starting to say it’s about some wealthy interests trying to buy this election,” Kousser said. “Any time you spend huge sums of money, it triggers this instinct in voters.”

Kathy Fairbanks, spokeswoman for the Yes on 26/No on 27 campaign, said her side is grateful “that voters seem to resent the out-of-state gaming companies and their $170 million deception campaign.”

The “Yes on 27” campaign similarly pointed fingers at their opponents.

“[Proposition] 27 took on over $100 million in deceptive and false attacks — $45 million before we even qualified to vote,” said Nathan Click, spokesman for that campaign. “It says that the same opponents who are funding these ads didn’t spend a cent to support their own sports betting proposal, [Proposition] 26.”

A majority of Democrats and Republicans rejected Proposition 27. Democrats were more narrowly divided over on-site sports betting, while just 28% of GOP voters supported Proposition 26 and half opposed the measure.

Just under half of likely voters supported Proposition 30, which would require wealthy Californians to pay an additional 1.75% in personal income taxes on annual incomes over $2 million starting in 2023. Proceeds would support zero-emission vehicle programs and efforts to fight and prevent wildfires.

Ride-sharing company Lyft is the proposal’s biggest supporter, having so far spent more than $45 million persuading voters to pass it. The state has directed ride-sharing companies to transition their fleets to electric vehicles by 2030, and Proposition 30 would heavily subsidize the cost of doing so.

Eighty percent of the proceeds would be used to encourage the purchase of new zero-emission vehicles and to install and operate charging stations for such vehicles. The remainder of the money raised would go towards wildfire protection and prevention.

Although the measure was backed by some environmental groups and endorsed by the California Democratic Party, Gov. Gavin Newsom calls it “corporate welfare” and strongly opposes it. The move is a “cynical scheme” by Lyft, the governor said.

According to the poll, 49% of likely voters support the voting measure, compared to 37% who oppose it. The rest was undecided.

While this may seem like good news for the initiative’s supporters, the failure to garner support from more than 50% of likely voters is a clear red flag, DiCamillo said.

“He’s in the game. That might not make it across the finish line,” he said. “When voters are undecided, they tend to vote no. They need to be persuaded by a statement that changing the status quo is acceptable.”

Newsom’s strong opposition to Proposition 30 appears to be the biggest threat, DiCamillo added.

“The No campaign has it easier. All they have to do is create doubt and inspire fear,” DiCamillo said. “The ‘yes’ side needs to convince voters that a change in the status quo is necessary.”

The prognosis for Proposition 31, which would ban the sale of most flavored tobacco products in stores and vending machines, was much clearer.

Major tobacco companies have spent tens of millions of dollars persuading Californians to vote against Proposition 31 and allow the sale of flavored tobacco products.

Their efforts appear to be failing: a large majority of likely voters support the ban, with 57% in favor, 31% against and 12% undecided, according to the poll. The majority of support came regardless of age, gender, or income; Conservatives were evenly divided on the measure.

“This is more of a health issue for voters,” DiCamillo said.

The ban passed the legislature and was signed into law by Newsom in 2020, but stayed in 2021 after a referendum challenged the law that qualified for the November 2022 vote.

If a referendum against a state law qualifies for voting, the law is suspended until voters can decide whether to enact it.

In the gubernatorial race, Newsom appears to be heading for an easy re-election. The poll found that 53% of likely voters said they would vote for Newsom, compared to 32% who supported Senator Brian Dahle, a conservative Republican from the northern California city of Bieber. Twelve percent were undecided.

Support for Dahle has risen slightly since an August poll, while it has remained stable for Newsom.

The Berkeley IGS poll was conducted online Sept. 22-27 among 8,725 California-registered voters, including 6,939 who were likely to vote in the November election. The sample was weighted to match census and voter registration benchmarks. Because of the weighting, accurate estimates of the margin of error are difficult, but the results are estimated to have a margin of error of about 2.5 percentage points in either direction for the likely sample of voters.

Adam Schiff Lays Out the Case Against Ginni Thomas