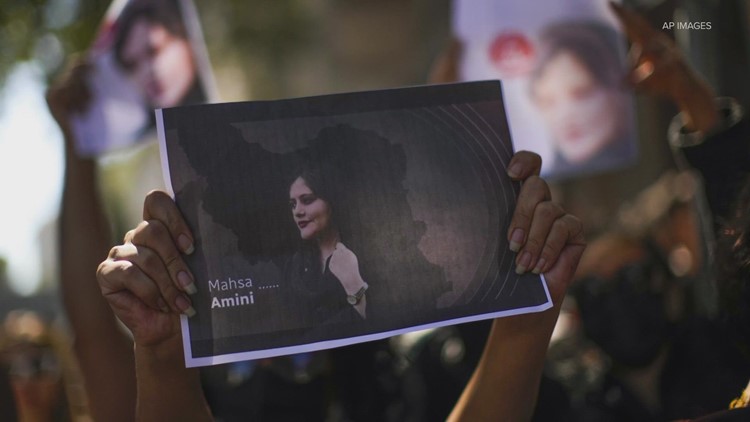 The protest comes after the death of a woman who was arrested over allegations that she broke the country’s dress code by wearing her Islamic headgear too loosely.

BELLEVUE, Wash. – Iranian activists in western Washington plan to protest this weekend in Bellevue following the death of a woman who was arrested on charges that she broke the country’s dress code by wearing her Islamic headgear too loosely.

Iranian authorities known as the Morality Police arrested 22-year-old Mahsa Amini last week, saying she failed to properly cover her hair in the Islamic headscarf known as the hijab, which is mandatory for Iranian women. Amini collapsed at a police station and died three days later.

Police said she died of a heart attack and denied being mistreated. The government released video footage allegedly showing the moment it collapsed. Her family said she had no history of heart problems. Her death in police custody has sparked daring defiance from protesters in the face of beatings and possible arrests.

In Iran and around the world, images show women protesting against the wearing of headscarves.

“I’m here without a headscarf,” said Iranian activist Homeira Bakhtiary. “I should be killed for not wearing a hijab?”

Bakhtiary moved to the United States from Iran in the early 2000s.

Bakhtiary is speaking out because she knows people in her country have largely lost access to the internet, which has been curtailed by the government.

“I hope that for once we will see them as people and not as political pawns,” said Ms. Amini, also an Iranian activist.

Amini returned to Washington on Thursday after protesting the Iranian President’s visit to New York.

“We have protested his presence at the United Nations and his membership in the Women’s Rights Commission on Iran because they do not deserve a seat,” Amini said.

Amini and Bakhtiary share different views on their homeland’s political future, but both said they had to speak out on a human rights issue.

“I wish I could go back to Iran and fight with them, but unfortunately as an activist I would be captured and killed if I go back,” Bakhtiary said.

“Today’s interview with you gives me a powerful platform for people fighting in Iran,” Amini said. “So I hope our elected officials will listen and do something about it.”

With the internet down in the country, people are calling on countries like the United States to help provide satellite internet to the people of Iran so they can share what is happening.

Groups are also urging the US to end negotiations with the Iranian government over nuclear programs.

The US government on Thursday imposed sanctions on Iran’s morality police and heads of other government agencies.

The sanctions come after at least nine protesters have been killed in clashes with Iranian security forces since violence erupted.

https://www.king5.com/article/news/local/bellevue/protest-bellevue-death-mahsa-amini-ira/281-e008f955-faef-4b3e-b8c5-cd3ea9ffe0ae Protest planned in Bellevue over death of detained woman in Iran

'Blonde' Could Make the World Safe for NC-17 Films Again

‘I was lucky’: Pilot who survived crash landing in the water at Alki Beach shares his story