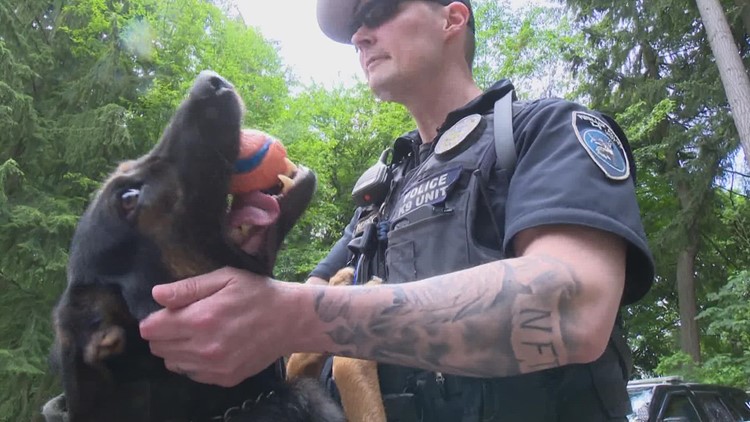 K9 Ice and his handler Nate Jendrick have been partners with the Puyallup Police Department for about a year but have already made a huge impact.

PUYALLUP, Wash. – Puyallup Police Officer K9 Ice played an integral role in the arrest of four suspects linked to a shooting in Tacoma over the weekend.

Ice and his handler, Nate Jendrick, have been partners with the Puyallup Police Department for about a year but have already made a huge impact.

“They do things we can’t do. They’re able to pinpoint suspects that we can’t find. They can get into places we can’t. And they can allow us to do our jobs more safely,” Jendrick said.

The duo have been involved in 20 catches, including their most recent case last weekend. Ice and Jendrick helped Tacoma police arrest four suspects accused of shooting a car at the 1600 block of South 47th Street on Sunday.

“Within minutes we were able to locate them, capture them and they were certainly surprised. They always are,” Jendrick said.

Ice is part of the K9 Metro Unit in Pierce County.

“Currently, Tacoma has one dog, Puyallup has two dogs, Lakewood has two dogs, and Pierce County has four dogs. We’re not many and it’s certainly a resource we’d like to have more of,” Jendrick said.

Despite their differences, Jendrick said there’s nobody he’d rather work with every day than his canine companion.

“He’s everything you want in a partner, he only has four legs and can do a lot better than me in some cases, so it’s great to have him and it’s a lot more fun to work with, he lets us get a lot did a great job,” said Jendrick.