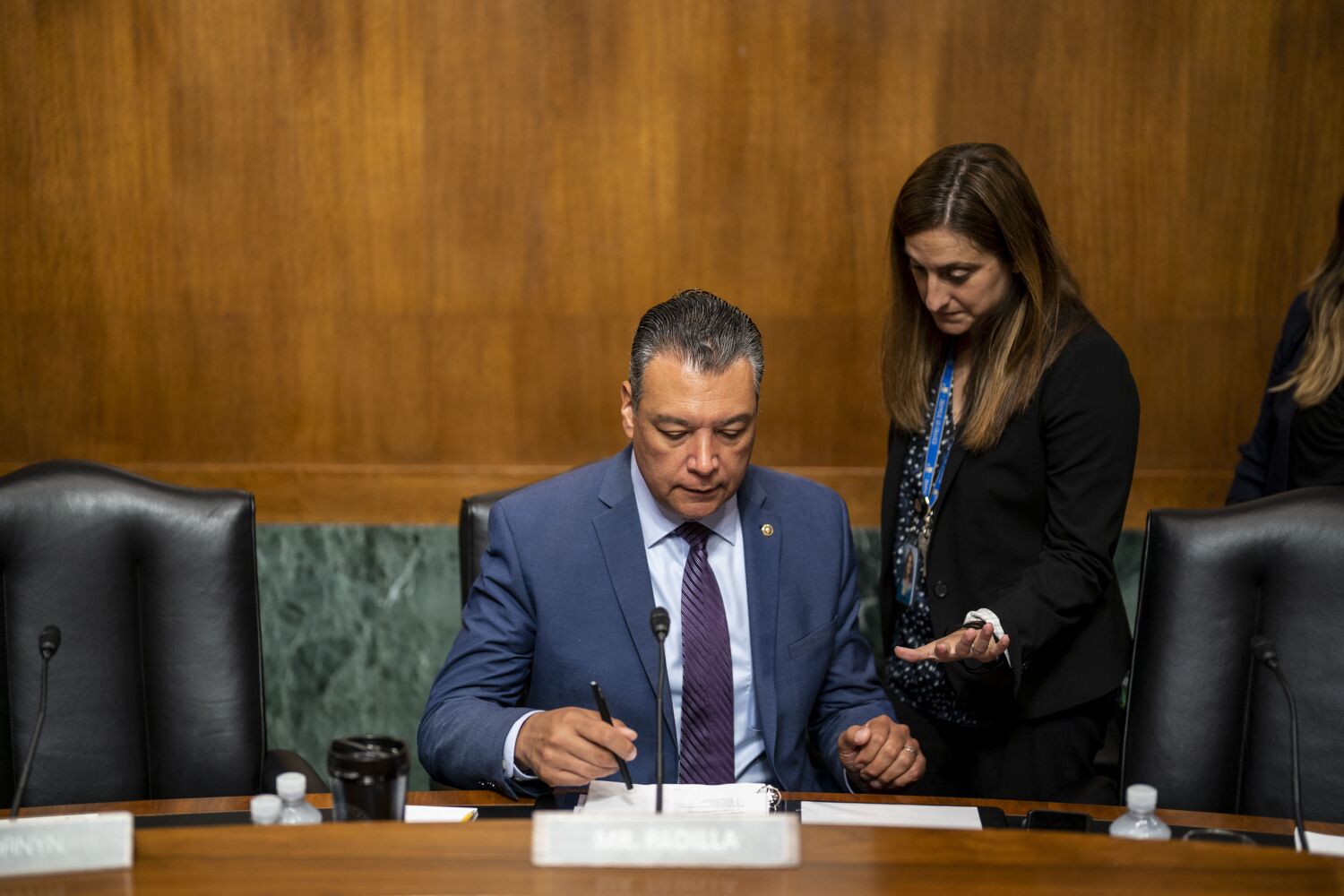 Sen. Alex Padilla (D-Calif.) has joined bipartisan efforts to prevent another Jan. 6, 2021-style attack on the U.S. Capitol, signing Wednesday as a co-sponsor of legislation protecting a 135-year-old known law such as the Election Census Act.

The Senate proposal, tabled in July, already had the backing of 10 Republican senators, who will ensure it can pass the chamber as long as all Democrats and the two independents who side with the party back it. But senators signaled earlier this month that the bill that would reform the certification process for electoral votes is unlikely to get a vote until after Election Day.

The House of Representatives introduced competing legislation this week.

The lower chamber approved that bill Wednesday by a vote of 229 to 203, with nine Republicans joining all but one Democrat, who did not vote to support the measure.

Padilla spoke to the Times just ahead of Wednesday’s vote in the House of Representatives. Below are excerpts from the interview, edited for clarity and length.

LAT: How was the process for you to join this legislation?

Padilla: I spoke about elections and the big question of how we can ensure that the uprising that we saw on January 6th is not repeated. [There were] Many factors have contributed to how the day unfolded, but one of the biggest is when you consider an ambiguity in the law that was exploited by the insurgents to disrupt the peaceful transfer of power and attempt to undo what was done choice was free and fair.

So supporting that language is part of ensuring that an uprising like the one we saw on January 6 does not happen again. We had broader reform last year, voting rights, access to the voting debates and talks in committee, even in the Senate, but there’s been a lot of momentum in recent months to specifically update the Electoral Counts Act.

I think it’s an important step that we should take before the end of the year and then continue working on the other tracks.

LAT: Was the process just a lot of talking, meeting members and getting a feel for what they were trying to do?

Padilla: It’s bipartisan. I wanted to make sure it wasn’t as complete as, “We’ll just do this and forget the concerns that exist in many states about voting rights and access to the ballots,” but the more I’ve had conversations with colleagues, I know that’s behind something like that there is real support.

Again, I know this is an important step in ensuring that an uprising like the one we saw on January 6th does not happen again.

LAT: I saw that, as you said, this proposal was described as a way to prevent another January 6th. Is this how members should talk to voters about the bill?

Padilla: I think it’s a key element. Absolutely. There are many laws in the books that haven’t been touched in a while, that were written in a different time, and so much has changed in our society. So if by adding the clarifications [we help] Ensuring the peaceful transfer of power after future elections is absolutely critical.

LAT: Is there a concern that the language change might backfire on people who believe there was widespread voter fraud and that the election was stolen?

Padilla: See, one thing you can’t control is what comes out of Trump’s mouth, so I can’t worry about that.

The way Trump has effectively whipped up his supporters makes him very, very partisan and so the fact that this has significant bipartisan support I think sends a strong signal to the public.

LATE: [Senate] All Democrats were assumed to support this bill because it has enough Republican support to pass the Senate. Has your support ever really been in doubt?

Padilla: First of all, details matter. And there are a lot of substantive pieces that have been discussed, sort of ironed out. You’ll see some technical changes when the rules committee meets on Tuesday, and there may be opportunities to further strengthen the law.

Is that all we will do to strengthen democracy? The answer is no. There is still work to be done to ensure basic voting rights and access to vote, similar to what we have tried to do with the John Lewis Voting Rights Act, the Freedom to Vote Act, and other efforts.

So this work will absolutely continue.

LAT: Do you think there are some of your fellow Senate Democrats who are at risk of opposing this bill for other reasons?

Padilla: I do not know. I am now actively involved in all of these conversations.

I’ve been in contact with many members throughout the day today.

LAT: How did your role as former Secretary of State shape your approach to reforming the Electoral Counts Act?

Padilla: As California Secretary of State, I oversaw the administration of two presidential elections—two primary elections and two general elections.

We are intimately familiar with each phase of this process, but again, what happened on January 6th, the reason people were invited and incited and referred to Congress was a misconception that there was the ambiguity in the law that there was it was possible to question that the vice president had authority he really didn’t have.

And it wasn’t just a protest. It wasn’t just a rally. It wasn’t just a figure of speech. It got violent. It became deadly. And we must do whatever is necessary to prevent such an uprising from happening again, and I think that will certainly help with the election count of this whole process.

LAT: Now that you’re on board with this legislation, is your role even to persuade more progressives to join and support the effort?

Padilla: I reach out and take calls to many of my colleagues to understand what my thought process has been and why I think it’s important and why they should support it. Feel free to answer these questions and add urgency.

I think it’s important that it’s done before the end of the year. If that pushes back to 2023, who knows how soon after the November election presidential candidates will start coming forward, and as soon as there are official candidates to talk about changing the rules – even if those are the rules for the whole Presidential Election Process Strengthens – Let’s not risk questions or concerns.

LAT: The news that you, Sen. [Michael] Bennett and Sen. [John] Hickenlooper are now co-sponsors, coming on the same day the House of Representatives will take up its version of this bill. Is the timing a coincidence or a sign of skill between the two chambers?

Look, like I said, there’s support for modernizing the Electoral Count Act, not just on a bipartisan basis, but on a bicameral basis.

I have good relationships with my California Housemates and the respective committees on the side of the House. I know that we are all working towards the same goal. In fact, I think that the more people in both chambers who support each other’s efforts, it helps.

LAT: I spoke to a couple of senators before Reps earlier this month. [Liz] Cheney and [Zoe] Lofgren announced that they would publish their own bill. Before the text was actually here, they said that the Senate bill was the best way forward because it already had 10 Republicans in the Senate at the time and the House of Representatives was still conducting its Jan. 6 committee investigation. There was no invoice text. People felt that there would not be time to reconcile both bills. How do you feel about what the process will be like to get something into the law?

Padilla: I do not know. I think there are multiple options, whether the Senate takes up the House bill, the House takes up the Senate bill, or a conference committee. The point is to get this done, I think before the end of the year.

LAT: Do you think the House bill could get enough Republican votes to pass the Senate?

Padilla: I do not know.

LAT: Is there a concern that some Republicans will back out after the election and decide they don’t want to?

After the last 20 months here, nothing should surprise me anymore. But I do not think so. Certainly not those who have already taken the step of lending their name to the bill. I don’t see that changing after November.

That doesn’t mean all 50 Republicans will vote for it if and when it’s put to a vote. For those who don’t, I really wonder what their motivation is, what their sincerity is in terms of commitment to our democracy.

Solomon Byrd had a unique journey becoming a USC playmaker