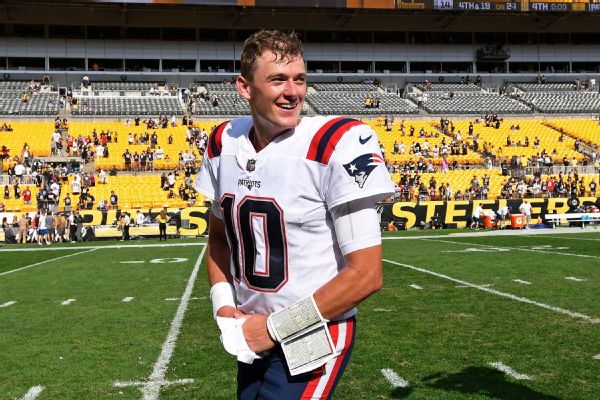 Jones, who has been inactive for the last three games, has told his team-mates his recovery from a high left ankle sprain he sustained on September 25 has progressed and there is one final hurdle to overcome in training. The Patriots’ first practice of the week is scheduled for Thursday.

Coach Bill Belichick has deflected questions about Jones’ status — and his overall quarterback plans — when asked in recent weeks.

“Hypothetics and all that, I’m going to stay away from that,” Belichick said Wednesday. “We’ll see what we’re actually dealing with here as we move forward.”

Veteran Brian Hoyer started the Patriots’ Week 4 game in Green Bay, but when he was out after two series with a concussion, rookie Bailey Zappe stepped in.

Zappe started 2-0 in the last two games. In a total of 11 quarters of action, Zappe is 51 of 70 for 596 yards with four touchdowns and one interception.

In the three games Jones started this season, the Patriots went 1-2 and Jones was 64 of 97 for 786 yards with two touchdowns and five interceptions.

Can the GOAT get her gold back? Amanda Nunes refocused for rematch at UFC 277