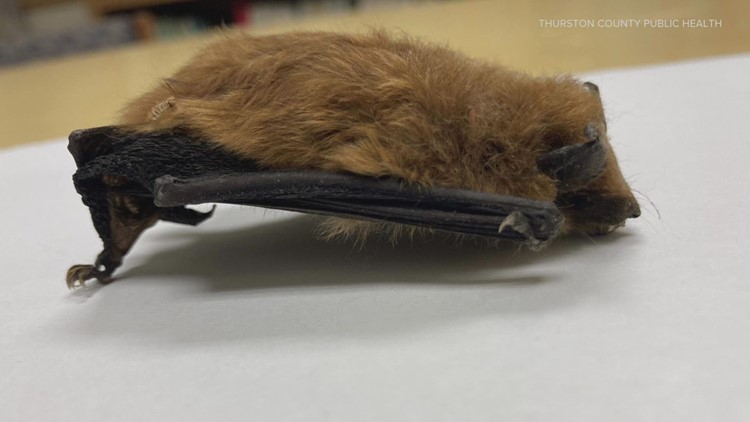 Suzanne Featherstone and her husband David Hruska credit their cat for killing the rabid bat.

OLYMPIA, Wash. – A bat found dead in an Olympia bedroom has tested positive for rabies, the first rabies case in Thurston County this year.

Homeowners Suzanne Featherstone and her husband David Hruska received their first round of rabies vaccinations Wednesday morning for sleeping in the room where the bat was found last Friday morning.

According to Thurston County Public Health, rabies is usually fatal.

“They told us if you have symptoms it’s too late,” Featherstone said.

She said she believes the bat entered through a window that was left open overnight.

She believes that she and her husband will be fine because they never came into physical contact with the bat thanks to their cat’s actions.

“Who knows what would have happened,” said Featherstone, “Good for the cat, she’s the heroine.”

Meowly is up to date on her rabies vaccinations, Featherstone said.

Sammy Berg, senior environmental health specialist for Thurston County, said public health officials should be contacted if a dead bat is found in a home or if a person or pet comes into contact with a bat.

Berg said the county typically gets one or two cases of rabies each year, adding that about six percent of all bats reported to the county have tested positive for rabies.

Whether a bat has rabies cannot only be recognized by its appearance. Whether a bat is alive or dead, handling an infected bat can potentially transmit rabies.

According to Thurston County Public Health, to avoid rabies:

Do not touch live or dead bats or let anyone in your family handle them.

Do not allow your pet to touch or play with a bat, and have your pets vaccinated against rabies per Washington law. If you find a bat in a bedroom or with an unsupervised child, try to safely capture the bat and have it tested.

A hangover, a New Jersey spa and an ex-Goldman Sachs trader