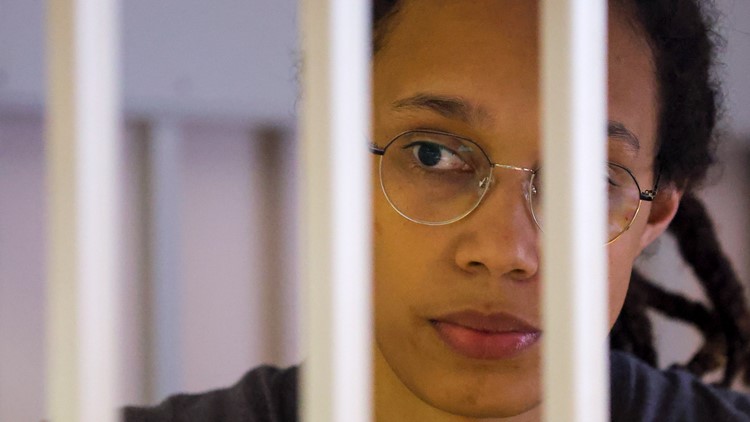 WNBA All-Star Brittney Griner was sentenced to 9 years in prison by a Russian judge on Thursday for drug possession and smuggling.

Here are reactions from the basketball and political world:

“Today, American citizen Brittney Griner was sentenced to prison in another reminder of what the world already knew: Russia is wrongly holding Brittney. This is unacceptable and I call on Russia to release her immediately so that she can be with her wife, family, friends and teammates. My administration will continue to work tirelessly and will do everything possible to get Brittney and Paul Whelan home safely as soon as possible,” President Joe Biden said.

“Today’s verdict and sentencing is unjustified and unfortunate, but not unexpected, and Brittney Griner remains unfairly imprisoned. The WNBA and NBA’s commitment to their safe return has not wavered, and we hope to be nearing the end of that process to finally bring BG home to the United States.” – WNBA Commissioner Cathy Engelbert and NBA said -Commissioner Adam Silver in a joint statement.

“The wrongful detention and unjust sentencing of Brittney Griner are brazen and unacceptable violations of the rule of law by Putin. Russia must release them immediately.” – said House Speaker Nancy Pelosi in a statement.

“Today’s sentencing of Brittney Griner was severe by Russian legal standards and proves what we have known all along, that Brittney is being used as a political pawn. We appreciate and continue to support the efforts of (at)POTUS and (at)SecBlinken to quickly strike a deal to bring Brittney, Paul and all Americans home. Getting Brittney and Paul home is the only goal and as such we should use all the tools available. We must stay focused and united. This is a time of compassion and a shared understanding that striking a deal to bring Americans home will be difficult, but it is urgent and the right thing to do.” – Brittney Griner’s longtime agent, Lindsay Kagawa Colas, tweeted.

Today’s sentencing of Brittney Griner was severe by Russian legal standards and proves what we have known all along, that Brittney is being used as a political pawn. We appreciate and continue to support the efforts of @POTUS and @SecBlinken to close a deal quickly[1/3]

“I think of BG and how much light she tirelessly brought to everyone around her. I hope that even after the sentencing, (at)POTUS and (at)WhiteHouse will continue to do everything in their power to bring home Brittney Griner and all other Americans jailed abroad.” – Brianna Turner, Phoenix Mercury teammate tweeted.

When I think of BG and how much light she relentlessly brought to everyone around her. Even after the sentencing is done, I hope @POTUS & @White House will continue to do everything in our power to bring Brittney Griner and all other Americans detained abroad home

“While we knew it was never the court case that would bring our friend home, today’s verdict is a sobering milestone in the 168-day nightmare our sister BG endured. We are still heartbroken for her, as we have been every day for almost six months. We remain grateful and confident to the officers who work every day to bring her back to her family and to us. We remain committed that the administration will do whatever is necessary to end their wrongful detention. We’re inspired by BG’s strength every day and work tirelessly to keep her in the public mind until she’s safely back on American soil. We won’t let her be forgotten. We are BG.” – said the Phoenix Mercury in a statement.

“Today’s verdict and verdict, while inevitable, is disappointing. The unjust decision today is what it is, unjust. It’s a terrible blow. Whatever talks Minister Blinken and his Russian counterpart must have, we trust they will conduct them all with care. Because it’s time. It’s just about time.” — Said the WNBA Players Association in a statement.

With Tim Hardaway’s induction, the Warriors’ Run TMC trio is officially reunited in the Hall of Fame

Which Free Fire YouTuber has better stats in May 2022?