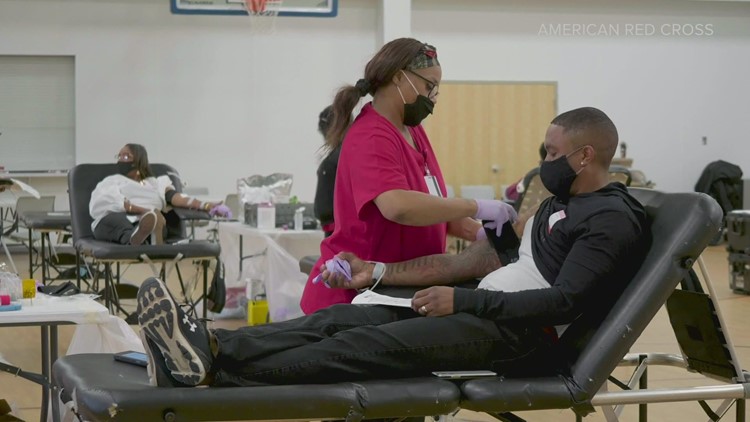 According to the American Red Cross, the disease affects up to 100,000 Americans, and at least 90% are African American.

Sickle cell anemia is a blood disorder that disproportionately affects communities of color in the United States. The disease attacks healthy red blood cells, turning them into stiff and sticky cells that often block blood flow.

According to the American Red Cross, the disease affects up to 100,000 Americans, and at least 90% are African American.

“The need for blood is constant and it can only be provided by another living human being,” said Tiffany Taylor, a spokeswoman for biomedical services at American Red Cross Headquarters.

Sickle cell patients receive blood transfusions on a regular basis, and better balanced blood yields the best results in preventing and treating symptoms of the disease.

“The antigens in their blood have the ability to change their blood, and they need a more matched blood transfusion from someone of the same race or similar ethnicity,” Taylor said.

However, the blood banks in the entire district lack a diverse supply.

According to the Red Cross, black donors make up less than 4% of all American Red Cross donors.

“Often this lack of knowledge and awareness leads to confusion and distrust,” Taylor said.

For this reason, the Red Cross launched the Sickle Cell Initiative in 2021. Part of a larger effort to reach more black donors.

On Saturday, June 25, from 9:00 a.m. to 2:00 p.m., the Shiloh Baptist Church in Tacoma will host the Dr. Charles Drew/Divine 9 blood drive. The Red Cross asks you to make an appointment.

Taylor said she hopes someone, despite their race, will want to donate.

“Not just [for] Sickle cell patients, but an impact in patients fighting cancer or who may need platelets when undergoing chemotherapy. To save the lives of babies in the NICU,” Taylor said.