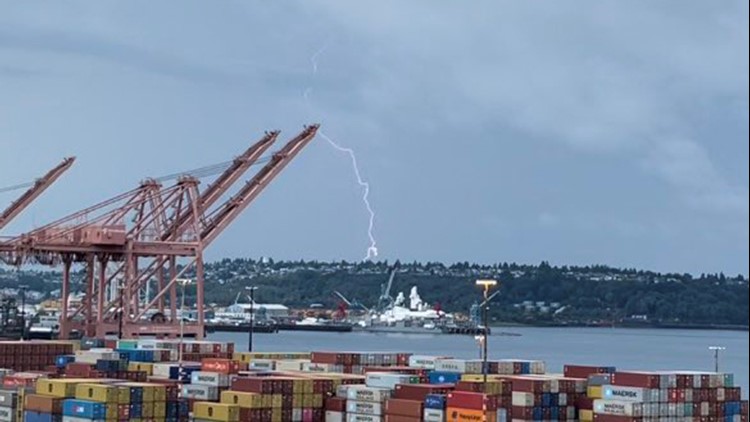 The lightning and dry conditions resulted in a red flag warning being issued for parts of western Washington.

The storms caused the Federal Aviation Administration to establish a ground stop for incoming air travel at Sea-Tac Airport for about 30 minutes. The ground stop was aborted at around 10:15

The Northwest Interagency Coordination Center said Between Tuesday evening and 10 a.m. Wednesday, there were 250 lightning strikes in Washington.

Storms are expected to move quickly, but residents are encouraged to take shelter if they see lightning or hear thunder.

Tacoma Public Utilities (TPU) reported that around 10:30 a.m. more than 13,000 customers were without power. At least five of the outages were due to lightning and the others are being investigated. According to TPU, crews were “working to restore power as quickly and safely as possible.”

With today’s thunderstorms in our area, King County Emergency Management is sharing ways to stay safe during severe weather.

The red flag warning applies to areas such as the Olympic Mountains and the North Cascades. The warning means that “critical fire weather conditions are either imminent or about to occur,” according to the National Weather Service (NWS).

The Weather Service issued the warning that scattered lightning in arid areas could start multiple fires.

The red flag warning is in effect for the northern and central coastal lowlands and western portion of the Olympic Mountains (fire weather zones 650, 651 and 652) until 11 p.m. Wednesday on Wednesday. Areas of the North Cascades “generally above 1,500 feet” (Fire Weather Zone 658) are in effect through a red flag warning through 2 a.m. Thursday.

South King Fire and Rescue said crews responded Wednesday morning to a home in the Twin Lakes area for a possible lightning strike and another report of a boat possibly struck by lightning off Dash Point Beach.

Storms are expected to be “generally fast-moving, which could limit rainfall and increase fire weather concerns” with lightning.

Thunderstorms moved through Grays Harbor County around 2:30 a.m. Wednesday morning, knocking out power to more than 5,100 Grays Harbor PUD customers. Crews were able to restore power to most customers by 8:40 a.m

Crews are working to restore power to customers in South Beach after a lightning strike around 3am. Power is back on in most parts of Westport and Westhaven. Crews work their way down the beach and regenerate lines once patrols are complete.

There are currently no major wildfires burning in western Washington.

At least three major wildfires are burning east of the Cascades, including Cow Canyon, Vantage Highway and Williams Lake.

How to stay safe during a thunderstorm

As storms sweep through western Washington, residents should remain vigilant and stay indoors.

Here are some ways to stay safe when you’re outside when the storm hits: