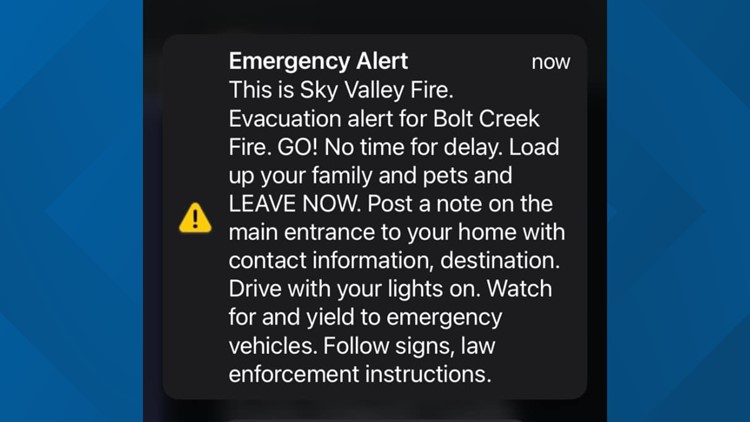 Residents in several communities, including Bothell and Everett, received the alert, which read in part, “Bolt Creek Fire evacuation alert. GO! No time for delay.”

Residents in communities such as Duvall, Bothell and Everett received the alert, which read in part, “Bolt Creek Fire evacuation alert. GO! No time to delay” and “LEAVE NOW.”

Sky Valley Fire, the Snohomish County Sheriff’s Office and the Everett Fire Department quickly took to social media to let residents know the alert for residents west of Index was incorrect and to ignore it.

A mandatory Level 3 evacuation order applies to residents north of US 2 between Index and Skykomish.

Both directions from US 2 have been closed between Index and Skykomish until further notice in addition to the evacuation order.

The Bolt Creek Fire near Grotto and Skykomish is now estimated at 2,000 acres and was first reported Saturday morning, according to the Washington State Department of Natural Resources.

The Washington State Fire Marshal said the fire is burning in heavy timber, logging and brushwood and is threatening Bonneville Power.

Firefighters battle massive fire near Hemet from the sky at night

Storm forecast to bring rain, could help with California wildfires